Culanwe, a priestess of Azura, has long suffered at the hands of Molag Bal. Her pain is so great it has torn a hole between Coldharbour and Laeloria, an Ayleid ruin in Grahtwood. 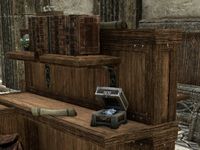 When you walk the road north from Elden Root in the direction to Cormount, turn east when you are on the bridge in front of the junction to Karthdar and you will see a treehouse. Climb up the treehouse to meet its three inhabitants, Tholor the Dreg, Rinces and Afwa. As Tholor is sleeping and Rinces is a squirrel, there is only Afwa left to talk to. He tells you about the nearby ruins, which are infested with Daedra. Someone named Culanwe has been trapped there by Molag Bal for longer than anyone can remember. Afwa's friend, Vastarie, went to Laeloria to set Culanwe free a long time ago, but she never returned. He asks you to look for Vastarie if you seek to thwart Molag Bal.

Head towards the Tower of Vastarie. You can either head in a more or less straight line west by south from the treehouse and end up in its back yard, or you take the more scenic route. For the latter, follow the road down a bit south and turn westward at the crossing before Elden Root. When you reach a terrace with a Bosmer alchemist's booth on it, turn north and climb the way up the hill; on its top you find the tower.

Before you enter the tower, you are encouraged to follow a strange voice and wandering lights into a nearby shrine. Azura wishes to speak with you. She tells you that a mage named Vastarie sought to end the suffering of one of Azura's servants, Culanwe, who is being tormented by Molag Bal. Culanwe's suffering is so great, a rift between Laeloria and Coldharbour has opened. Azura placed a seal upon Laeloria so Molag Bal's servants could not pour through, but Vastarie found a way through. Azura asks that you find a way into the tower as Vastarie did. Follow in her footsteps and don't fail. 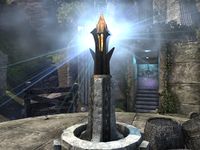 <The spidery script upon the tablet seems to flicker when you don't look at it directly.>
I think I'm supposed to say "Irrai."
<The tablet pulses with power.>

Talk to Irrai after she appears. She explains that Vastarie entered Laeloria by breaking the seal with a relic called the Twilit Heart. You'll need to feed it souls to charge it with magical energy so you can enter. Irrai says Vastarie used something called a Sigil Geode to charge the Heart.

Follow Irrai, as she will guide you to an alchemy table where a small box contains a sigil geode. Take the geode and speak with Irrai for further instruction on how to use the sigil geode. 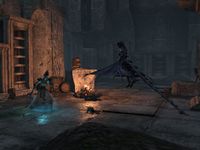 Charge the sigil geode by draining the animus from three of the daedra outside in the courtyard. In order to drain their souls, you must reduce their health by half, then use the popup command to drain their remaining health. Be warned that moving will interrupt the drain, simply reducing their health. If this occurs, simply resume the process. Once the sigil geode has absorbed three Daedric souls, it will be fully charged, and you invigorate the Twilit Heart.

Now head towards Laeloria's entrance. In front of it stands the Twilit Heart, a crystal on a stele. Use the sigil geode to charge the Heart. Irrai will then move to open Laeloria gate, allowing you to follow her inside. You and Irrai will encounter Vastarie, who is still alive and very angry. You learn that Irrai once betrayed the wizard and lured her into a trap, as she planned to do with you. Help Vastarie fight back against Irrai. Once she is sufficiently weakened, Irrai will try to escape. Vastarie will give chase and pin her down. Speak with Vastarie.

She says that you need to imprison Irrai in the sigil geode. If Irrai dies outside of the stone, the two of you are going to spend the next century imprisoned within Laeloria. Deep within the ruin lies a portal to Coldharbour. Once you enter, you'll have no hope of escape unless you have Irrai's soul trapped in the geode. 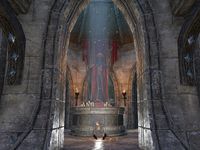 You can choose to either imprison her in the geode as Vastarie tells you, or kill her outright. If you choose to imprison her, Vastarie will approach you and explain that Irrai is bound to the tablet you summoned her at. With Irrai in the sigil geode, Vastarie can use Irrai as a tether between Coldharbour and Laeloria to allow the two of you to escape when you enter the realm to retrieve Culanwe's remains. If you decide to kill Irrai, one of you will be trapped in Coldharbour forever, and Vastarie will be understandably frustrated. Regardless of your decision, the matter of Culanwe's torment must be resolved.

Accompanied by Vastarie, press your way through the ruin until you eventually reach the portal to Coldharbour. Follow the wizard through the portal. On the other side you will find Vastarie and a summoned skeleton in a battle with several Dremora. Advancing further you will find an elaborate platform with an altar, upon which Culanwe's remains have been placed, while Culanwe's soul is held and being tortured above. Her soul is kept imprisoned by the energy emanating from two crystals flanking the platform. Vastarie will instruct you to destroy the soul pinions binding Culanwe's soul to the altar. Be aware that they are not undefended; as soon as you approach each pinion, three Dremora will ambush you.

After you have shattered the crystals, climb up the stairs to the altar and collect Culanwe's remains in order to take them back to Nirn. Return to Vastarie to discuss your exit strategy. Once you leave, you'll find yourself outside the entrance to Laeloria, next to the Twilit Heart. Take Culanwe's Bones to their final resting place at the nearby shrine of Azura. Interact with the Daedric Princes' statue to speak with her. Azura rewards you for your deeds.