This article is about alchemy labs used to make potions and poisons. For the player-built home addition related to the Hearthfire add-on, see Alchemy Laboratory. 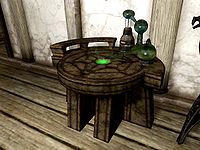 Alchemy Labs are places where it is possible to perform Alchemy. A category listing all places where alchemy labs can be found is available at Category:Skyrim-Places-Alchemy Labs.