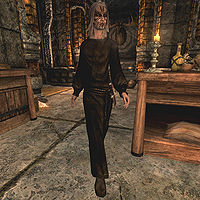 Bothela is a Breton apothecary merchant who lives in Markarth. She owns and runs the Hag's Cure with her assistant and friend Muiri. She expresses regret at the situation of the Forsworn. Odvan in Cidhna Mine is her grandson.

Bothela begins her day at 8am when she gets out of her bed to open her shop. She will spend her entire day inside her shop handling customers. After twelve hours of work, she will lock up the shop for the night and head to bed. She will wake up at 8am to repeat her schedule.

Bothela wears black mage robes and a pair of boots, and is equipped with an iron dagger. She carries a key to the Hag's Cure and a selection of common loot and gold. She knows a few spells from various schools. From the Conjuration school she knows Conjure Familiar; from the Destruction school she knows Flames; she can use the spell Healing from the Restoration school.

Approaching Bothela while her shop is open will have her greet you in a number of ways:

"The Hag's Cure is here for all your discreet needs..."
"I have potions for disease, love sickness, irritating children..."
"A little bit of old Reach magic can cure whatever ills [sic] you...."
"Oh yes... you'll need one of my special brews..."
"Not scared of an old woman now, are you?"

On ending a conversation with Bothela, she will offer two unique remarks:

What's your opinion on Markarth?
"We'd be better off without the Silver-Bloods. They send their brute, Yngvar, to shake some coins from me every few days. And Betrid Silver-Blood is always asking for more potions to fuel Thonar's 'ambitions.' Gives him a temper fiercer than any bear."

What do you know about the Forsworn?
"Only that they break an old woman's heart. So many friends, so many kin, all lost trying to rebuild a past that was over long ago."

Asking her about her shop's unique name will have her offer you a job to deliver a potion:

The "Hag's Cure." That's a unique name.
"Comes with living to a ripe old age, people start thinking there's something magical about you. Then, the insults. Still, a little knowledge of plants and potions can get you by. Not that anyone likes to admit buying things from you. See? I even have a little potion for the Steward. Mind handing it over to him? Just say it should solve that problem he has."

Should you initially deny the request, asking her about her shop again will provide you with another chance to take it. 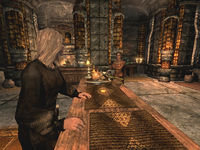 Bothela can be seen having random conversations with Muiri which show her concern and care for her:

Bothela: "No, no girl. It's the pickled spider tongue and then the decayed taproot. Do it the other way, and your cure turns into a poison."
Muiri: "There's just so much to memorize. How am I supposed to remember what goes where for every single herb?"
Bothela: "You will. Until then, you'll taste every potion you make before you sell it."

Bothela: "You should be more careful with the men you pick, dear."
Muiri: "He said he loved me..."
Bothela: "Real men prove their love. Words are as empty as the air they run through."

Bothela: "Stop moping about, girl. Tears won't change what you've done."
Muiri: "I was such a fool. How could I let him use me like that?"
Bothela: "We all get used, dear. It's living with it that makes you a woman."