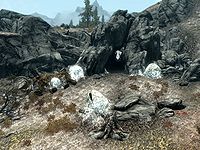 Cronvangr Cave is a medium-sized cave southwest of Kynesgrove, inhabited by frostbite spiders and vampires. It has two zones: Cronvangr Cave and Cronvangr Broodlair. It is located in the northwestern part of the sulfur pools characteristic of central Eastmarch, almost due east of Mixwater Mill.

The exterior hints at what can be found inside: it is covered in webs, and one egg sac is in front of the entrance. A dead mammoth is to the left. There are also several plants that can be harvested for ingredients in the surrounding area. 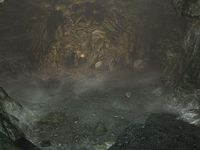 The first chamber in the caverns 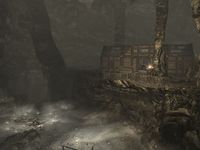 The first room contains six frostbite spiders, an egg sac, and an iron ore vein. A small button on the northwest wall will open a rock door to a cavern, which contains a wooden building and several vampires on a raised area at the back of the cavern. Beware a flame spout trap in the passage on the way to the vampires. The vampires are generally all found sleeping in the building; however, some of them may be awake, so be careful if you don't see them. On the lower level, there's a circle of candles around a dead body and two long tables with benches, one of which holds a single loose coin. Two ramps up to the raised area and building are against the cave wall.

The inside of the building is a mess, strewn with viscera and gore. There are three single beds (normally all occupied by three sleeping vampires), a central table with a random filled soul gem and a copy of the Lockpicking skill book The Locked Room on top, a second table with an iron war axe and a strong box on top, several chairs, barrels, and sacks, and an unlocked chest with a random poison next to it at the foot of one of the beds. There are several corpses nearby and in the cavern itself, which the vampires may raise to help them fight. Six poisons and a medium coin purse are on two sets of shelves, among ruined books and other clutter. One more random potion can be found next to the barrels to the left of the shelves, on one of which is an apothecary's satchel. A second chest, this one adept-locked, can be found behind the building near an alchemy lab and arcane enchanter. A sapphire can be found on top of a barrel next to the second chest. There is also a long wooden table and bench behind the building with two loose coins on it.

The rest of the zone can be reached from another tunnel in the first room. It consists of a sparsely lit cobwebbed pathway winding down into a cavern with a pool of water at the bottom, with two egg sacs along the path. There are several small frostbite spiders along the path, and it is possible for one or more of the spiders to fall off the ledges and into the water below. The spiders will often become trapped in the water, as the pathway out is fairly narrow and the spiders don't navigate it properly. This makes killing any spiders that fall much more difficult without the use of archery or long-range spells. An unlocked chest and a floating skeleton can be found in the water. A small pathway to the east leads to the second zone, Cronvangr Broodlair. 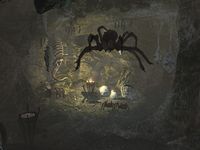 Broodlair with a giant frostbite spider

The zone begins on a twisting path with several webs you need to break through and several small frostbite spiders along it. A small chest can be found in front of you where the tunnel turns to the right; it is hidden by two layers of spider webbing behind an unlootable desiccated corpse, and can be easily overlooked. The path continues to the broodlair proper, where a giant frostbite spider will drop from the ceiling to join many other, smaller spiders. A boss-level chest can be found in the back of this room, with a large egg sac to the right and a moonstone ore vein to the left.

There's a shortcut back to the first zone up the slope to the north, with an egg sac on your left shortly before you re-enter the first zone. The shortcut will place you on a ledge above the passageway just before the first room of Cronvangr Cave.