Brodir Grove is a small circle of stones due northwest of Highpoint Tower, with a reaver camp in the middle. Three of them will confront you as you approach; Stormfang is in the hands of a reaver lord. 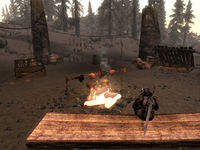 It is centered around five large standing stones. The camp is within the perimeter of the stones. There are ropes strung between four of them with bone chimes hanging from them. To the right of the stone to the south is a lean-to shelter with a bed roll underneath. two large crates, two trama root plants are behind it and a scathecraw plant beside it. To the left there are three barrels, three crates and four sacks stacked together. Following the perimeter around counter-clockwise there are more crates and barrels stacked between the first and second stones with bone chimes between stones and stacks of even more barrels and crates around the second stone, with an adept locked chest beside the stone. Continuing around another stack of barrels and crates are between the next stones with more bone chimes separating them. Also there are two bear traps on the ground between the stack and third stone as well as more bone chimes. 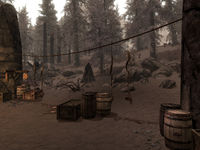 The bone chimes at the grove

There is a post with two garlic braids and two rabbits hanging from it. There are two crates and barrels by the third stone as well. On one of the crates is an expert locked East Empire Company strongbox and to the left of the third stone is a firewood pile. More bone chimes hang between the third and fourth stones and more crates and barrels by the fourth stone. In front of the fourth stone is an unlocked chest and to the left of the stone is a heart stone deposit. No rope or bone chimes are between the fourth and fifth stones. There are two scathecraw plants and just outside the perimeter are two more heart stone deposits. By the fifth stone is yet another crate with three sacks stacked on top, a grindstone and a boss level unlocked chest with another bear trap in front of it. There is also no rope or bone chimes between the fifth and first stones, just a couple of ash yams growing and on the back of the fifth stone is a set of three weapon racks, one of which is holding a leveled battle axe. In the center of the camp is a large split log acting as a bench in front of a fire pit with a spit and cooking pot hanging over it.