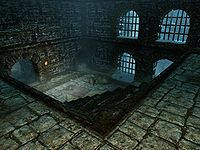 The Midden is a medium-sized dungeon underneath the College of Winterhold containing the Atronach Forge and home to the Augur of Dunlain, a former mage of the college.

There are three entrances: a trapdoor in the northern corner of the College courtyard, another trapdoor at the base of the stairwell in the Hall of Countenance, and through an easy-to-miss cave in the northern face of the rocky outcropping that the College rests upon, being the only way to access the Midden without joining the College. The dungeon contains two sections: The Midden and The Midden Dark.

The corridors and rooms are littered with the bones of humans and animals, as well as various containers and plenty of other detritus and clutter. A careful search yields many items that can be used at the Atronach Forge, including salt piles, torchbug thoraxes, rubies, empty wine bottles, brooms, and skulls.

Entering the Midden from the courtyard leads into an icy corridor heading northeast. On the left beside a pile of firewood is a pair of iron boots. Opposite these against the other wall is a basket containing a leather strip. Ahead, the corridor opens into a room with a walkway around two sides and a level below with a flight of stairs leading down. The hanging skeleton with the deer head has two rubies for eyes, which can be retrieved using Telekinesis or by disturbing the skeleton and causing it to fall (which risks the rubies falling to random locations). Above, on a shelf just below the ceiling, is a basket containing four refined moonstone. On your right are barred openings looking into another room with water falling ahead. On the left the walkway continues past another corridor heading northwest. In the northern corner, on a wooden block, is a cast iron pot containing a potion of cure disease, and in front of the pot is a patch of white cap fungus.

The northwest corridor passes two small alcoves opposite each other. The alcove on the right contains two more patches of white cap, and has a strange idol fashioned from bones and deer antlers. Behind it, on the left, there is a piece of canis root, with another underneath the basket, buried in the floor. The alcove on the left has a crate with a bulb of garlic on top, while farther along on the left is another patch of white cap. The corridor ends at a wooden door leading to the Hall of Countenance.

Returning to the two-level room and descending the stairs, the floor below is partially covered in old rugs. There is a pickaxe at the bottom of the stairs. There is another barred opening, as well as one that is unbarred. In the room beyond, you can hear an undead creature moving around. A corridor heads northeast from the two-level room. Ahead is a fork in the passageway, with a patch of bleeding crown in the middle, an oil slick leaking from a drain on the right, and a skeleton on the floor. By its outstretched hand is a random enchanted iron dagger. To the right, a short passage leads to an open cell with a bed roll inside, with blood splattered all over the floor and walls, and a chair sitting outside the cell. To the left, the passage ends at the top of a flight of stairs, with an ice wraith lurking at the bottom. This room has a high vaulted ceiling, with many arches supporting it. The passage continues beyond the arches to the northeast, and after a short distance, turns to the southeast next to a magical light source that lights up as you approach.

Ahead, the passage descends another flight of stairs and then opens into a circular chamber in front of the Atronach Forge, with a passage heading southwest. To the left of the forge is a wardrobe with a small square wooden table in front. On the table is the Atronach Forge Manual, two bowls of fire salts, and a ruby. Beside the table is a broom. The forge itself is a raised circular stone with the Oblivion daedric symbol carved in the center, a pedestal, an offering box, and a handle on the near side. The passage to the southwest curves around to the south and ends at a closed gate. There is a chamber beyond the gate with hanging moss growing down the wall. Against the east wall next to some crates is a bucket containing a deathbell and two torchbug thoraxes, while against the south wall is a slightly raised section with a patch of white cap and a patch of Namira's rot growing on top. There is a ledge on the wall above, holding a salt pile and a red mountain flower, above which is a deer skull fixed to the wall. There is a leather strip and an orange dartwing on the floor against the north wall, while the passage heads west into the room seen through the barred openings. There is a cart with empty wine bottles in and around it, while to the left a flight of stairs leads up to a walkway that ends under two arches where a leveled draugr archer stands. There is a wooden door to the west on the bottom level, behind which is an L-shaped passage that ends at another door leading to The Midden Dark. 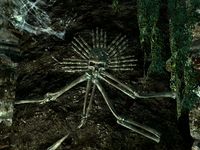 Skeletal design at the entrance of the Midden Dark

Beyond the door, a passage heads east for a few paces and then turns north. At the corner is a skeletal design with some hanging moss growing to the right. To the north is a large ice chamber, with a nautral bridge crossing a lower level below. The chamber is guarded by an ice wraith. Below you on a rock to the left is an unlocked wooden chest. Across the bridge, an ice tunnel enters another chamber, with stairs up on the right and a passage heading northwest. The passage leads to a flight of stairs descending to another chamber, with a wooden door that is locked and indicates it requires a key (however, there is no actual key for the door, which is scripted to open in the course of quests). Beyond is the Augur of Dunlain, whom you can access during the quest Good Intentions, and again when you come to complete the Restoration Ritual Spell.

Returning to the previous chamber, climbing the stairs on the right leads to a passage heading north, before descending another flight of stairs. At the bottom is an alchemy lab ahead, with a salt pile and a copy of the Alchemy skill book De Rerum Dirennis. To the left is a patch of white cap, and to the right stairs descend into a room containing another white cap and two hostile skeletons in a lower level filled with human bones.

To the southeast is a wooden door. Behind the door is a circular ritual chamber with a large black metal gauntlet on a pedestal, central to the quest Forgotten Names. The symbol of Oblivion is emblazoned on the palm of the gauntlet. A long wooden table opposite holds the Midden Incident Report and the Investigator's Key. An alcove to the right features a kettle containing two pieces of creep cluster, a bowl of fire salts, and a sample of ice wraith teeth. Beside this is a goat hide, and on a crate behind is an iron war axe, a bowl of bone meal, and a canis root. Opposite the alcove against the wall is a bucket containing a silver sapphire necklace. There are several hanging moss growing from the walls, and a ring of skulls high up on ledges around the room.

To the southeast, a corridor leads to the top of more stairs with a dead goat, a leg of goat, a bloodied woodcutter's axe, a salt pile, a sheaf of wheat, a bulb of garlic, and a loose septim all on a cart wheel. At the bottom of the stairs is another passage, which is eventually blocked by thick cobwebs you will have to burn or chop your way through. Ahead in another heavily vaulted section are two leveled frostbite spiders. Around the area you can find several more white cap fungi, a lootable skeleton, an iron helmet, a banded iron shield, an iron sword, and a lute. The passage exits the area heading west, passing into the ice chamber's lower level beneath the bridge, and then outside to the shore beneath the College.

Once through the exit, the player can either reenter the dungeon, or jump down a small cliff to an outdoor cave below. The cave exits near the shoreline underneath the College. It is possible to reenter the Midden Dark through this entrance through a combination of careful jumping and persistence. This is useful for characters wishing to access this area and the Atronach Forge without having to enroll with the College.