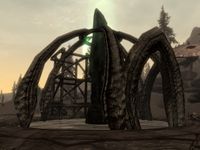 The Sun Stone is an All-Maker stone north-northwest of Tel Mithryn.

Once cleansed, this stone gives you the power to cause a Sun Flare, a fiery explosion that deals up to 100 points of fire damage around you, with greater damage done within this range to closer enemies. Once you use this power, it disappears from the Powers menu, and you must return to the Sun Stone to obtain it again.

The stone shows the usual signs of construction, with wooden scaffolding on the west side, and pickaxes, shovels, hammers, and carts in the vicinity. Several nightshade plants and fly amanita fungi grow around the stone. A path leads south-southwest to Tel Mithryn.

Before you cleanse the stone, during the day, six unique reavers will be working on and bowing to the stone. During the night, Drovas Relvi, Elynea Mothren, and Ulves Romoran will also be found at the stone. When you cleanse the stone, a leveled lurker will rise from the water around the base of the stone and attack you and the workers. After the lurker is defeated, the reavers will remain peaceful and be removed from the game once you leave the area, and the other workers will express their thanks and return to Tel Mithryn.