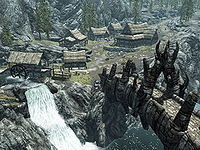 The bridge and town are of vital interest to both the Stormcloak rebels and the Imperials in the civil war. The townspeople of Dragon Bridge are worried that either side may seek to destroy the bridge as a means of preventing the other from crossing.

There are two families that live in Dragon Bridge: Horgeir and Olda, and the Lylvieve family. The guards have been harassing the Lylvieve family and Faida, the proprietor of the inn by refusing to pay, stealing, and attempting to "have their way" with Julienne Lylvieve. The mill, however, has prospered due to the increased demand for lumber.

The town consists of a main road running northeast from the bridge toward Solitude. Dragon Bridge lumber camp and sawmill are the first buildings to the left of the road after crossing the bridge into Dragon Bridge. The mill is powered by the Karth River, which flows beneath the bridge on its way to the Sea of Ghosts. Next to the lumber camp is the only outpost for the Penitus Oculatus, who replaced the Blades as the personal security and espionage force for the Emperor when the Blades disbanded. Northeast of the outpost is Horgeir's house, home to Horgeir, his wife, and his brother Lodvar.

Opposite his house is the town's inn, the Four Shields Tavern, which is the only building on the eastern side of the main road. Behind the inn is a secondary road that starts near the bridge and circles the inn before rejoining the main road at the other end of town. Next door to Horgeir's house is the Lylvieve family's house, where Azzada Lylvieve lives with his wife and two children.