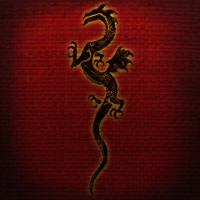 Peryite is one of the Seventeen Daedric Princes that dwell within the realm of Oblivion. As the Daedric Prince of Pestilence,[2] his sphere of influence includes tasks, natural order (not to be confused with the perfect order of Jyggalag), contamination and pestilence.[3][4] Peryite's sphere is described as "ordering the lowest orders of Oblivion".[5] He is also known as the Taskmaster,[5] the Blighted Lord,[6] the Lord of Infection and Pestilence,[7] the Bringer of Disease and Pestilence,[8][9]:313 the Lord of the Natural Order,[2] the Master of Tasks,[10] and the Lord of Abundant Pus and Bountiful Vomit.[7] Peryite "blesses" his worshipers with diseases, and is considered one of the more destructive Princes.[11] He is typically depicted as a green four-legged dragon, and often takes on the form of one, with the likeness to Akatosh seen as some primordial and curious jest.[UOL 1] Peryite occasionally appears as ghostly apparitions of vermin, such as skeevers.[12] The coiling, snake-like dragon and the skeever are two of Peryite's most sacred symbols.[7] The Nordic goddess Kyne is said to give Peryite the spirits of skeevers when they die.[13] 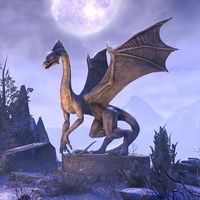 A shrine to Peryite (ESO)

Peryite is considered one of the weakest of the Princes.[3] Some unfortunate Dremora Churls and Caitiffs find themselves in the employ of the Taskmaster.[14] Peryite's summoning day is the Ninth of Rain's Hand,[15] but an incense can be created from vampire dust, one silver ingot, a deathbell flower, and a flawless ruby that will allow one to communicate with the Prince.[12] His enemies are Ebonarm, Boethiah, Vaermina, and Mephala.[16]

Peryite's breath purportedly pollutes "both cloud and pool".[17] Peryite is in charge of keeping daedrons - chaotic creatia imbued with sufficient purpose and function from the exertion of Daedric or mortal will - from causing damage in Oblivion, mainly through events known as 'realm-rips'.[18] When asked, Fa-Nuit-Hen's tutor Riparius says that "trying to keep ahead of it all keeps Peryite mighty busy, but nobody really feels sorry for him." He then goes on to say that Peryite "earned it".[18] Despite his weak reputation, his plagues have often been deemed dangerous enough to potentially wipe out all of Tamriel.[10] It is also theorized that Peryite may have been involved in the creation of the Thrassian Plague developed by the Sload.[4]

Peryite often takes a polite or formal tone when dealing with mortals.[19] Instead of reacting with rage when rejected, he keeps a cool head.[19] Rot is sometimes described by the Erabenimsun Tribe as "the touch of Peryite".[20]

A legend regarding the viridescent dragon frog states that the little amphibians were once a breed of giant green frogs that grew as large as Dragons. These frogs envied the Dovah's ability to fly, so they sought out Peryite and made a pact with him. The Daedric Prince granted their wish, but it came with a price. The frogs got the wings they wanted, but the size of their bodies was greatly reduced.[21]

Some believe Peryite is responsible for the Knahaten Flu.[22] No one knows what brought the flu to Orcrest, but some natives blamed the Argonians, while others theorized that Peryite was responsible.[23] In 2E 582, a pair of Peryite worshipers sought to enter the city and gather evidence which they could bend to claim that Peryite was definitely responsible for the flu.[24] Nothing substantial came of the investigation, but they found a few scraps parroting the aforementioned theories.[24]

The ancient Dragon Priest, Zaan the Scalecaller, turned to worshiping Peryite after her Dragon Lord, Thurvokun, abandoned her.[25] Zaan was worthy enough for Peryite to grant her Spellbreaker at some point in time.[26] In 2E 582, a Peryite Cult took up residence in Scalecaller Peak. The cult worshiped Zaan, and experimented with a gruesome disease in hopes of unleashing a plague.[10] They infected the creatures that inhabited the mountain with the disease. Ogres and giants were among those infected.[27] Their symptoms were glaringly obvious and should have been crippling, but the disease unintentionally made them more powerful and excessively aggressive.[10][28] Zaan and the Peryite cult were stopped by the Undaunted at the behest of Breton historian Jorvuld Davaux.[29] Following her demise, Zaan infected Jorvuld with her plague with Peryite's assistance.[29] It is unknown whether or not Davaux found the means with which to cure himself.[29]

In 2E 582, a group known as Peryite's Chosen attempted to spread the word of Peryite throughout Senchal after the Dragons were released from the Halls of Colossus.[30]

In 3E 433, five worshippers of Peryite performed a ritual at the Prince's hidden shrine, located along the banks of the Silverfish River in Cyrodiil. The spell was intended to summon Peryite, but instead, the souls of the worshippers were sent to the Pits, where they became trapped. The Champion of Cyrodiil stumbled upon the motionless bodies of the worshippers by the shrine, and was tasked by Peryite to travel to a plane in the Pits and recover their souls. The plane consisted of a volcanic island inhabited by many daedra, with a Blood Well tower and a series of volcanic caves called the Sightless Grotto. The Champion rescued the souls of the worshippers and returned them to Tamriel to earn the Prince's favor.[31]

In 4E 201, Peryite tasked the Last Dragonborn with slaying Orchendor, a former priest of Peryite who had abandoned the Prince. In death, Orchendor's soul was sent to the Pits, where Peryite punished him for his disobedience.[12] 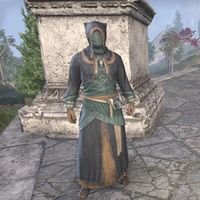 Heavy and concealing clothes worn by Skeevemasters, who often collaborate with rats (ESO)

Peryite's followers preach the wonders of their Prince and the mysteries of the divine skeever.[7] They would be glad to contract a disease and die in their own filth "as Peryite intended".[2] They see every malady as a blessing from Peryite: fungal infections, scabies, rashes, mucus-filled lungs, itchiness and irritation in all forms and tooth decay are some of the many afflictions adored by his cultists.[7][32] Peryite's cultists seek to spread whatever illnesses they have to everyone they meet.[7]

Peryite's worshippers are not well known or documented, although in the book Dagonists Through the Ages two large cults are briefly discussed: the Diseased, an organization of self-described social outcasts, and the Natural Order, who consist of venerable nobles and aristocrats across Tamriel that secretly worship the Taskmaster.[33] An interview with Phrastus of Elinhir and Lady Cinnabar of Taneth also implies that Peryite might have had a minor presence and influence amongst the Dragon Cult of the Nords due to their veneration of dragon-kind. [UOL 2]

There was also a particular group known as the Afflicted that consisted of Bretons located within the Reach 4E 201. Peryite's "blessing" for them was infection with a plague, although they were also granted some amount of resistance to its deadly effects.[34] They had unusually bright red skin and the ability to spit poisonous vomit at their enemies, but were eventually killed by Peryite's champion in his quest to kill their overseer, the Bosmer known as Orchendor. Originally from the town of Cul Aloue in High Rock, they were "shepherded" to the Dwemer ruin of Bthardamz.[35] Orchendor and the Afflicted were meant to stand ready, awaiting Peryite's command to cover the world with his blessing.[1] They also worshiped strange draconic totems and brewed tinctures in their worship of Peryite.[36] The Afflicted drank the solutions they brewed, which other mortals would call poisons, to "heal" themselves.[35]

Peryite, who is known as the Master of Tasks and the Lord of Order, is a revered spirit in the Reachmen pantheon that shares many characteristics with Akatosh, in pivotal ways such as being attributed to "time, rigid natural order, (and) draconic imagery". This has lead to scholars concluding that there was a cultural diffusion between the early ancestors of Men and Mer in the Northwestern parts of Tamriel. To describe Peryite as a necessary evil would be a misnomer, for while the Reachfolk see him as necessary, they see the good in him maintaining a balance as a force of nature. While a Reachmen may be claimed by a blight or plague, they will come out of these natural tragedies healthier. This keeps the dangers of overpopulation in check, and allows a new generation of Reachfolk to build immunities to what Peryite throws at them.[37]

Spellbreaker, as seen in Skyrim

Though his only known influence in Dunmeri culture is in Ashlander rites,[20] Peryite is interestingly brought up to be a Figuring Father in relation to Mephala, Black-Handed Mother,[38] in a mysterious text that might be implying some sort of connection between him and the Morag Tong (despite him and Mephala being enemies).[UOL 3]

The Spellbreaker (also spelled Spell Breaker) is an artifact attributed to the Daedric Prince Peryite. Superficially a Dwarven tower shield, it is one of the most ancient relics in Tamriel. The shield not only protects its wielder from physical damage, but also from magical attacks, by reflecting magicks, dispelling curses, or silencing any mage about to cast a spell. It is said that the shield still searches for its original owner, and will not remain the property of anyone else for long.

There are curios associated with Peryite of which little is known of, such as the Bilious Censer, the Toxicruciform, and the Golden Scab. They were last known to be in Gazmod the Collector's possession.[39] Although these theories have not been validated or elaborated upon by other sources, two other artifacts attributed to Peryite (Denstagmer's Ring and the Mirror of Hard Truths) are briefly mentioned by an interviewer during the Second Era, whose information may or may not be reliable.[UOL 4]

The Pits is a realm of Oblivion, created and ruled over by Peryite, the Daedric Prince of Pestilence. Here, Peryite guards the lowest orders of Oblivion.

What little that has been seen of the realm resembles the Deadlands, with lava seas, volcanic islands and ruined structures. The realm is usually completely inaccessible to mortals, but there have been several exceptions.