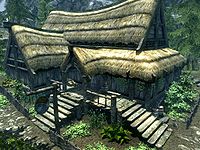 The Sleeping Giant Inn is a small inn and tavern in the town of Riverwood. It is the first building on the left-hand side coming from Whiterun.

Orgnar is the innkeeper, selling food as well as several alchemy ingredients, which can be used at the alchemy lab in the corner by the door. Rooms are normally rented from Delphine. However, when Delphine is traveling elsewhere, Orgnar will rent you a room, even though his dialogue still tells you to talk to Delphine.

* Leaves once Alduin's Wall is begun. Orgnar becomes innkeeper and owner.
† They only appear if they were followed during Unbound.

Wooden steps lead up to a covered porch at the front of the inn with several thistles, with several barrels of food around the building. You will often be able to find Stump the dog on the deck and the children living in Riverwood playing around the inn. At the rear is a small vegetable patch consisting of six potato plants, six leeks and eight cabbages growing, with a further four cabbages in a cart beside it. 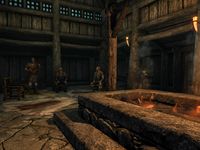 Sven performs before an audience

It is a typical Nord inn, with a fire pit down the middle of the common room. The L-shaped counter is at the northeast end, with five long wooden tables along the northwest and southeast walls. There are three doorways leading to bedrooms, two on the northwest side and a larger one on the southeast side. Against the northeast wall is a large vat, several food barrels, a pile of firewood and a set of shelves that hold three bottles of alto wine and five bottles of wine, with racks hanging from the ceiling in front of them. These hold ten rabbits and six pheasants, also hanging from the ceiling are two garlic braids, a bunch of dried frost mirriam and a bunch of dried elves ear. On the counter are several pieces of cheese, a salmon steak, a bottle of alto wine and a bottle of wine. Under the counter and on the floor beside it is a copy of There Be Dragons, a small coin purse, five loose septims, an iron war axe, five more bottles of alto wine and three more bottles of wine.

To the left of the doorway into the larger bedroom is a set of shelves holding several loaves of bread, two bottles of alto wine, six bottles of wine, while to the right is an alchemy lab built into a table. The long wooden tables against the walls typically hold bread and a selection of wine and alto wine. However, the table in the western corner of the room also holds a selection of cheeses and two salmon steaks.

The larger bedroom is Delphine's room. It contains a single owned bed coming out from the southeast wall, opposite the door with small bedside tables on either side and a narrow table farther to the right with a small coin purse, five bottles of alto wine, and a copy of Fall from Glory on top. Against the southwest wall is a wardrobe and a long wooden table and chair. On the table are four bottles of wine, an iron dagger, several red and green apples, a couple loaves of bread, a medium coin purse, and four loose septims. 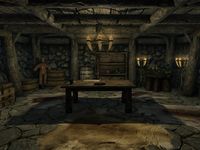 The wardrobe has a false back panel that opens to reveal a flight of stairs leading down to a secret room containing a central table with a map of dragon burials taken from the dragonstone you recovered for Farengar Secret-Fire from Bleak Falls Barrow and a copy of The Book of the Dragonborn on top. (The room is revealed to you during the quest A Blade in the Dark). In the western corner is an alchemy lab with a potion of stamina and a potion of the defender on top and a set of shelves to the left. These hold two ice wraith teeth, a salt pile, a Nordic barnacle, five slaughterfish eggs, a taproot, two bunches of tundra cotton, a potion of destruction, a potion of the warrior, a potion of stamina, a potion of minor magicka, a potion of resist fire, a potion of minor healing, a draught of health and a potion of health. To the left of the shelves is a barrel containing ingredients, with a bunch of lavender, a bowl of glow dust, and a giant's toe on top.

Against the northwest wall are six weapon racks holding a Blades sword and several iron and steel weapons. Underneath is a quiver of steel arrows and an unlocked chest. There is an arcane enchanter against the northeast wall, while in the eastern corner is a low table and chair with a steel dagger, a copy of The Rise and Fall of the Blades, a large coin purse, and four loose septims on the table. There are food sacks to the right, and an unlocked chest farther to the right. Finally, in the southern corner is a practice dummy in front of a couple straw bales.

Delphine uses the inn as a small safehouse and base of operations until the quest Alduin's Wall, at which point she gives the inn to Orgnar.