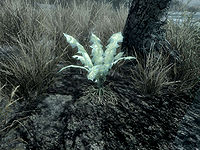 Nirnroot is a bright green plant normally found growing near water. They glow, making them easier to locate at night, and also emit a unique chiming sound. While in-game text claims that nirnroot does not regrow, it actually does regrow normally like other plants. A related plant is crimson nirnroot, which has nearly identical alchemical properties (only details of the Damage Health and Damage Stamina effects differ). They can be combined to make a four-effect potion.

Damage Health poisons made using nirnroot have the same strength as ones made using standard Damage Health ingredients. However, the gold value of such poisons is 12.6 times larger than standard ones. See the effect page for details.

In terms of combinations of two ingredients, Nirnroot can be combined with 63 other ingredients.

22 guaranteed samples can be found in 19 different locations. Locations with multiple samples are:

It is categorized as a rare ingredient, meaning that most apothecary merchants have a 21% chance of carrying 1-4 samples. In addition, it may be randomly found only in rare-type apothecary's satchels. Other possible locations for already-harvested samples include:

166 nirnroot plants can be found in 85 different locations. Locations with the greatest numbers are: