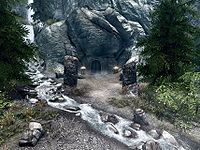 It is found to the west of Falkreath, due south of Knifepoint Ridge.

The clearing in front of the iron door that serves as an entrance is strangely devoid of harvestable vegetation. The remains of a number of stone pillars imply the approach was once far grander than it is now. There is a vacant beehive hanging from the rock face to the right of the entrance. A waterfall to the left forms a brook across the path before joining a pond on the right. The entrance to Twilight Sepulcher can only be opened with the Skeleton Key. 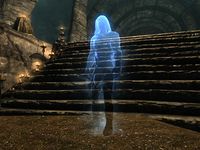 You begin in a well-lit narrow tunnel that opens into a large cavern after two turns. In front of you is a wide flight of stairs leading up to a large door. On your first visit, a ghost, who turns out to be a Nightingale Sentinel who is known to you, will be standing in front of the stairs. Conversing with the sentinel provides his name, but no information about what you will face along the Pilgrim's Path. There is a double row of broken pillars leading to the stairs, and large rock pillars support the ceiling around the cavern. The cavern is dry and lit by braziers, and candles on stands line the stairs. The only other items of interest are against the east wall level with the stone pillars in front of the stairs; the sentinel will direct you to them if you converse with him. These items consist of the skeletal remains of Nystrom, his satchel, and a leveled enchanted weapon. Searching Nystrom's skeleton will reveal his journal, which will provide clues about the upcoming tests found along the Pilgrim's Path. 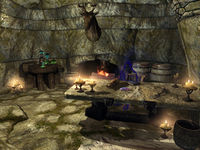 At the top of the stairs is a large corridor heading south; this is the start of the Pilgrim's Path. Just before the corridor turns to the west, there is a bowl of troll fat and a skeever tail (see bugs) on the ground on your right. At the end of the corridor is an unlocked iron door, which opens into a room with stairs leading down in front of you past terraces containing stone benches and a walkway around the edge. There is a Nightingale Sentinel at the bottom of the stairs, and another in a room in the southwestern corner. The southwestern room includes a stone table holding a random filled soul gem, a salt pile, and a copy of 2920, Evening Star, v12. Behind the table is a chair, two barrels of foodstuffs, a fireplace, and a button under the table that activates a hidden door on the south wall. There is an alchemy lab to the left of the fireplace, and a set of shelves opposite. The shelves hold a sheaf of wheat, a bulb of garlic, a silver ingot, and three common books. Behind the hidden door is an alcove housing a set of shelves, which hold a knapsack, two bottles of wine, one bottle of alto wine, one bottle of Nord mead, a leveled potion of regeneration, a leveled potion of healing, magicka, or stamina, and an unlocked chest.

Returning to the previous room, to the north are two arches that lead to a side area with two more sets of shelves holding eighteen common books, a copy of Shezarr and the Divines, a steel dagger, a flute, a sprig of snowberries, a bowl of bone meal, a potion of cure disease, two bottles of wine, a bowl of void salts, a random potion of invisibility, a random potion of pickpocketing, two random poisons, and a sack of foodstuffs. At the bottom of the stairs is a pulpit with stairs up the back, behind which is a doorway into a corridor. After a few paces, the corridor turns to the south, then back to the west. Just after the second turn, there is a pressure plate that triggers a poison dart trap, which shoots darts from either side of a doorway in front of you. 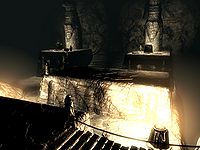 Past the doorway, you enter a typical Nordic catacomb area, with a Nightingale Sentinel at the top of a flight of stairs. There are alcoves along the sides holding unlootable skeletons, and an unlocked iron door at the far end. Through this door is the second of the five tests. It is a large space, with brightly lit parts and a shadowy path running through them. There are several flights of stairs up and down, leading to and from raised platforms. The light is deadly, and will drain health at an alarming rate. (Not even Become Ethereal will prevent the damage.) Stick to the shadows to navigate safely. There are also four tripwires in the area, all of which trigger poison dart traps. There are bodies of bandits in the first two patches of light, and hanging mosses growing from the corners and edges of some of the platforms, mostly in lit areas. The first tripwire is found about halfway up the first flight of stairs; this trap's poisoned darts are shot from in front of you, and will only hit you if you continue to climb the stairs before they finish firing. The second tripwire is at the top of the next flight of stairs down, with the darts shot across the bottom of the stairs from your left; again, the easiest way to avoid damage is to stand still until they finish. Continue to follow the path by sticking to the shadows until you reach a flight of wooden stairs leading up to a wooden bridge. The third tripwire is at the start of the bridge; the easiest way to avoid damage from this trap is to move to your left or right until the darts shot from in front finish firing. Across the bridge, there are two narrow flights of wooden stairs leading up to a higher platform, with a gap between them where the last set of darts were firing from. At the top, the path turns to the right to descend another flight of stairs trapped with a tripwire at the top; again, wait until the darts have stopped shooting from in front of you below to avoid damage. However, instead of descending the stairs, first quickly cross the brightly lit area ahead, passing a brazier to another dark area at the far end. Stone stairs then lead down to the left to a platform with two large urns near the start of the area. You can then either return across the lit section on the upper platform, or follow the shadowed path again. From the previous stairs with the final tripwire, continue to follow the shadowed path up a wide flight of stairs to an iron door. 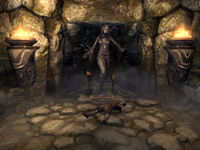 Beyond the door are catacombs. The path heads south before turning to the west, with an urn in an alcove at the corner. At the next turning is an unlocked chest. In front of you to the south is a statue of Nocturnal herself, with a dead bandit lying in front of the statue beside a wooden plate holding a random empty soul gem, a soul gem fragment, and eight loose coins. Behind the stone braziers on either side are two chains; pulling both of these opens a hidden door behind the statue. The chains also turn out the lights. This is the third of the tests described in Nystrom's journal; "what she desires most, but reject the material" has an answer that should now be obvious... Nocturnal desires darkness. 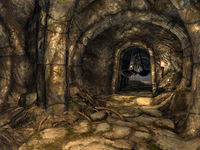 Through the hidden door is a tunnel that twists before opening into a wider corridor. Partway along the corridor is a pressure plate that triggers a poison dart trap to shoot from the ceiling behind you. As you continue, a swinging blades trap will trigger in the narrow corridor ahead. There is also another pressure plate halfway along this trapped corridor which triggers the poison dart trap a second time. At the far end of the swinging blades trap is a third pressure plate that triggers a spear trap, with the spears thrusting from all sides. Beyond this is an iron door, which when opened or closed will trigger a battering ram trap in the corridor beyond.

There is an alternative route to bypass these traps. Just before the first pressure plate, there is a master-locked iron door on your left that leads to a room with two Nightingale Sentinels. You enter on a walkway along the northern edge of the room, which features a sunken central section and a walkway around the edges. The first section of the walkway runs parallel to the heavily trapped corridor. At the end is a doorway into a corridor still heading west. After a few paces a corridor branches to the south, while continuing ahead leads to a room along the main path just beyond the battering ram trap with the iron door to the next zone. Turning south leads past a small balcony overlooking the sunken part of the side room, where one of the two sentinels is standing if they haven't yet detected you. The corridor continues to a matching doorway onto another walkway on the south side of the room. This doorway is where the second sentinel is standing unless alerted. At the end of this southern walkway is a doorless square cage, as well as wooden stairs down to the sunken portion of the room.

At the bottom of the stairs is a sideboard against the south wall holding three common books, a random dagger, and a ruby. Against the west wall is a statue surrounded by a two-tiered basin of water. There are two small pedestals in front of the statue; one holds a random poison, and the other a medium coin purse with a loose coin at the base. Against the north wall is another sideboard with three loose coins next to a goblet. A broken table in front of the sideboard may hold a copy of the Sneak skill book Sacred Witness (see bugs). To the right of the sideboard is a bookcase holding seven common books, a bowl of frost salts, and a sack of food. To the right again is a set of shelves holding two pieces of firewood, and along the east wall is yet another set of shelves holding three bottles of Nord mead, two bottles of alto wine, and two bottles of wine. In front of these shelves are two stone tables; one holds three random poisons, and the other a random bow and a copy of the Lockpicking skill book Proper Lock Design. In the southeast corner is a random poison on an unusable barrel.

Return to the end of the main path and the iron door leading to the Twilight Sepulcher Inner Sanctum. 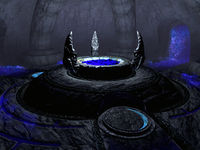 You enter the zone in a wide corridor, similar to those seen when approaching puzzle doors. At the far end of the misty corridor are large double iron doors, past which is a flight of stairs leading down. At the bottom, the corridor turns to the east, and through another doorway is a shaft that you are required to jump down. You will receive a small amount of damage from the fall. Once at the bottom, search Anders' skeleton, which carries a note that explains what happened to Nystrom and himself. Shortly after this, a cutscene will start, and the floor will lower to reveal a circular room with a hole in the ground in the center for the Skeleton key to unlock Ebonmere, with three doors that you can't interact with spaced equally around the wall. The doors become portals to the entrance upon completion of the quest. You can then return here at any time from a portal in Nightingale Hall to change your agency of Nocturnal. 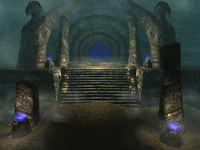 Upon your return to the entry cavern where you first met Gallus, the braziers will now all be lit by blue flames.