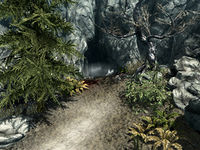 Bloated Man's Grotto is a small cave inhabited by spriggans and cave bears. 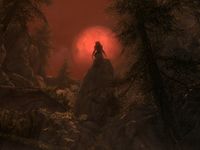 The grotto during the quest

It is located south of Sleeping Tree Camp and north-northwest of Ilinalta's Deep, a short distance south of the main road from Whiterun to Markarth.

During the related quest, a Great Hunt is hosted here, and the sky is dominated by a Bloodmoon. The regular inhabitants are replaced by Sinding and a host of hunters, as Sinding tries to use the grotto as a sanctuary after escaping from Falkreath jail.

* All of these hunters only appear during the related quest to hunt the werewolf Sinding.

The path leading to the entrance is marked by a pile of stones with human bones and a skull lying on them. There are many tundra cotton, red, blue, and purple mountain flowers growing along the path. There is a fly amanita fungus to the right of the entrance, and a white cap fungus to the left.

The entrance leads into a natural tunnel, with torches on the walls lighting the way as it descends to the northwest. There is vegetation all along the passage. At the bottom, it opens into an idyllic grotto, with trees, plants, waterfalls, and flowers, rabbits and butterflies during the day, and luna moths and torchbugs in the evening and at night, all sheltered from the outside world. The grotto consists of a single path that winds around the perimeter of a large vale. Depending on your level, there will be two wolves, sabre cats, or cave bears ahead in a clearing. On your right is a ledge against the southeast wall, with a dead tree stump hiding an apprentice-locked chest. To the east is a small pool being fed by a low waterfall. Under the water is an unlocked wooden chest and two Nordic barnacles.

A path continues to the north in front of the pool, passing between ledges on either side. Above you, a fallen tree spans the ledges over the path. Many of the rocks have hanging moss growing from them. Ahead is a leveled animal, and hiding behind a tree stump on the left is a spriggan. You may also see a leveled animal high on a rock ahead; it is in the same place as where you first see Sinding during the related quest. The ledges on either side can be climbed in several places, where additional mountain flowers and butterflies can be found. To the right of the first spriggan is a stone flight of stairs. To the right of these stairs, it is possible to climb the rocks until you reach a small pool fed by another waterfall. Climb the rocks and head northwest from the pool to find a gold ore vein. 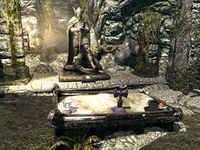 Shrine of Talos with Bolar's Oathblade

The path continues to the west, climbing a second flight of stairs before passing under an arch and into the remains of an old fort-like structure. In the center is an altar with a shrine of Talos, an empty random soul gem, a random potion of healing, and a random potion of stamina on top. Behind this, in front of a statue of Talos, is Bolar's writ and Bolar's Oathblade, an enchanted Blades Sword. There are many more hanging moss growing from the walls around this area, and opposite the statue among some rubble is an unlocked chest. Climbing the rocks here, it is possible to cross the walls above the arches and head west, staying as high as possible. At the end of the rocks is a hawk's nest, with a hawk flying in circles and then landing. A second nest and hawk are to the south of the arches on top of the rocks. Each of these can be harvested for a hawk beak and three hawk feathers. Returning to the altar area and continuing to the west, you pass under another arch and descend a short flight of stairs. 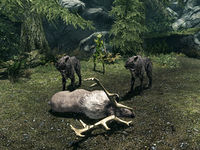 Past the bottom of the stairs is another clearing, with a leveled animal, a spriggan hiding against the tree stump on the right, and a second spriggan hiding by another tree stump ahead on the left. The path then turns to the south, and in another clearing is another leveled animal. The path continues across a stream, then passes under another fallen tree and turns southeast. The next clearing has a spriggan hiding against a tree trunk, with a leveled animal standing over the corpse of a deer in the center of the clearing. Climb the rim's rocky ridge at its lowest point to the east of this clearing to locate a master-locked chest tucked between two taller rocks.

From the clearing with the dead deer in the middle, the path continues to the east and eventually returns to the entrance.

Throughout the interior of the grotto are many plants, flowers, and fungi that can be harvested. Consider the following as minimums: 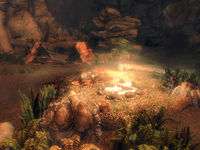 The campsite used by Hircine's hunters

Bloated Man's Grotto is used by Sinding as a sanctuary during the quest Ill Met By Moonlight. During this quest, the grotto's appearance changes drastically. It becomes much darker, with a huge, red full moon dominating the sky. The shrine, Oathblade, and writ are removed, and the animals and spriggans are replaced by a variety of hunters. Upon entering during the quest, you will find an encampment in the first clearing where J'Kier sits dying. Around the camp Batum gra-Bar, Ma'tasarr, and Hoddreid already lie dead among two small tents containing bed rolls and two other bed rolls by a campfire. The latter two bed rolls are still usable. The path to the northwest is blocked by broken tree trunks. Following the path past the pool and continuing onward, Sinding will spot you from atop a rock high above. You can decide to spare him or kill him. As you continue up the stairs, you will find bone chimes hanging from the arches. Regardless of your choice, Sinding will run off to the west and start killing the hunters with or without you. As you descend the stairs, Rissing will attack, shortly followed by Tsrasuna. In the next clearing, you will find Eriana, Torkild the Fearsome, and Yar gro-Gatuk, who will attack in unison. Cross the stream and continue to the next clearing to find Ahjisi, Heratar, and Ra'kheran, who will also make quite a combination. 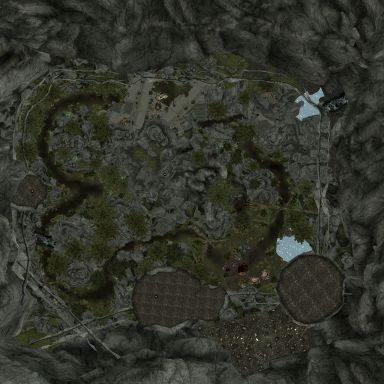 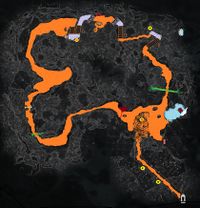