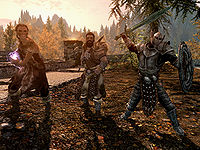 Bandits are rogue lawbreakers living a life of plunder and are one of the most common enemy types in Skyrim. You will typically find them in camps, some of which are marked on your map, and some of which are unmarked. Of the marked locations, bandits often inhabit both the interiors and exteriors of fort-type and other structures.

Although most bandits will attack you on sight, some may attack only when you get too close. Still others will demand that you pay them and attack if you refuse. Bandits can be members of any race (except Altmer), and may be spellcasters, archers, one-handed melee fighters, or two-handed melee fighters.

While the stronger bandit types will not appear until after you've reached the levels shown, you will continue to meet low-level versions even at high levels. Boss-level bandits will always be at the highest possible level, and will normally be identified as "Bandit Chief". Bandits of each type may vary in the combat equipment and style they use.

Normal Bandits are generally fairly easy to kill, while Bandit Chiefs and Marauders are tougher. Unlike other Bandit Marauders, Bandit Marauder mages (bandits with the Bandit Wizard class) begin appearing at level 24.

These bandits wield one-handed melee weapons and shields in battle. They carry one of the following weapons, depending on your level:

All bandits also carry a random assortment of items, which include beverages, lockpicks, food, jewelry, gems, tools, ingots, and a small amount of gold. Bandit Plunderers and Marauders carry more gold and may carry additional lockpicks. 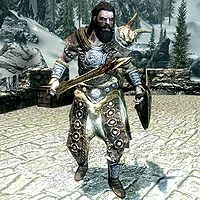 A Bandit Maurader looking for trouble

In addition to the weapons listed above, these bandits wear a set of leveled light armor:

^1This male Redguard bandit (EncBandit01Melee1HRedguardM) also appears in the list of level 1 archers (SubCharBandit01Missile), but has all the stats and inventory appropriate for a one-handed weapon fighter.
^2These Bandit Highwaymen are actually set as level 0, which means they have lower health and stamina than other bandits that appear when you are the appropriate level. If Dragonborn is installed, their level and stats will be corrected (hover to see values). 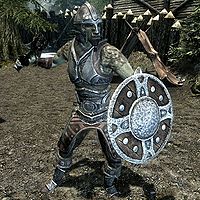 These bandits wield one-handed melee weapons and shields in battle. They carry the same weapons and miscellaneous items as their light armor counterparts, and wear a set of leveled heavy armor: 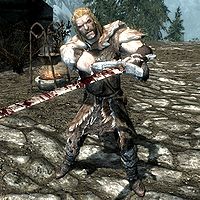 These bandits carry large, two-handed melee weapons into the fray. They wear the same leveled armor as their one-handed light armored counterparts (without the shield), and also carry one of the following weapons, depending on your level:

Two-handed melee bandits also carry a small amount of gold and have a chance to carry a few lockpicks. Bandit Plunderers and Marauders carry an orcish dagger and have no lockpicks.

^1These two-handed melee bandits appear in "berserker" leveled lists; they are identical to other two-handed fighters, except that they have a morality of No Crime instead of Any Crime and have the csHumanBerserkerLvl1 fighting style instead of csHumanMeleeLvl1.
^2SubCharBandit01Melee2HBerserk and SubCharBandit02Melee2HBerserk contain the same list of bandits, which means the berserkers that appear in the level 1 list also appear in the level 5 list (with stats and perks appropriate for level 1 bandits). 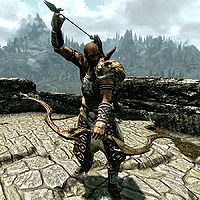 Archer bandits prefer to keep their distance, using a bow and arrows to attack. These bandits have the Bandit Archer class. They wear the same leveled armor as melee bandits, and also one of each of the following weapon types, depending on your level:

Archers carry the same miscellaneous loot as their one-handed counterparts, and also have a small chance of carrying additional arrows of any type (including glass, ebony, and Daedric). Archer Bandit Plunderers and Marauders carry more gold than those at lower levels.

^1This male Redguard bandit (EncBandit01Melee1HRedguardM) has all the stats and inventory appropriate for a one-handed weapon fighter, and also appears in the list of level 1 one-handed melee bandits (SubCharBandit01Melee1H).
^2None of the Khajiit archers can actually appear in-game as they never got added to the respective leveled list. 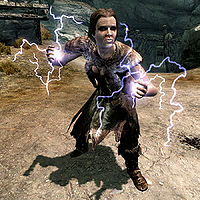 In addition to their gear, bandit mages carry a random assortment of items, including lockpicks, food, jewelry, soul gems, ingredients, books, spell tomes, a leveled Conjuration or Destruction staff, and a small amount of gold. Bandit Plunderers and Marauders carry more gold and have a chance to carry additional lockpicks than lower-level mages.

^1"Magicka Recovery 2" is a 0 magicka cost spell with the effect "Recover Magicka, 2 pts." This spell is available to NPCs only.
^2Bandit Marauder mages begin appearing when the player is level 24, rather than level 25 like the other bandit types.

Bandit Chiefs use the same fighting style as other melee bandits, but are a higher level, which means they have more health, more stamina, and more perks. All Bandit Chiefs carry a leveled dagger (steel, orcish, or elven) in addition to one of the following weapons:

In addition to the equipment listed above, all Bandit Chiefs carry a leveled amount of gold. 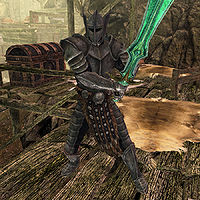 These Bandit Chiefs wear the same heavy armor as their one-handed allies (without the shield). They carry a leveled dagger (steel, orcish, or elven) in addition to one of the following weapons:

^1This Nord bandit chief has a higher magicka value of 40 rather than the standard 25.

Some quests that require going into a bandit hideout or dungeon include: 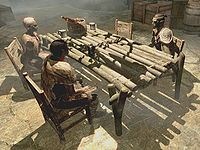 Bandits gathered around a table

If you speak to a bandit who is leaning against a wall, typically guarding the outside of a hideout, they may give a generic, non-hostile response (such as "You need something?"), although after a few seconds they will draw their weapon and attack. Male bandits will talk to themselves while idle, but they do not talk to each other unless scripted by a certain location [verification needed — verify males only].

A male bandit who has just discovered a corpse may say: