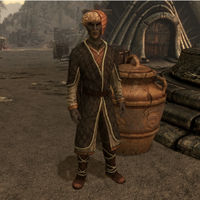 Vendil Severin is a Dark Elf who lives in Raven Rock in Severin Manor. His wife is Tilisu Severin and his daughter is Mirri Severin.

He wears fine clothes, a fine hat, and some fine boots. He wields two leveled daggers (up to Daedric quality), and carries two health potions, some gold, and a Severin Manor key.

He wakes up early in his house at 6am. After wandering his house or the town he heads to the Retching Netch at 5pm. After four hours in the bar, he leaves for his house, finally going to sleep at midnight.

"Vendil Severin. A pleasure to meet you, serjo."
"Always glad to help, serjo. What can I do for you?"
"We meet again, serjo. Speak your mind."

When you reopen the mines, he praises you, saying:

"Your contribution to our community will never be forgotten. Azura protect you, serjo."

He can sometimes be seen conversing with other citizens:

Glover: "So what do you think, Vendil? You think this town will survive?"
Vendil: "I don't know. There are many who would've already expected us to leave this place."
Glover: "Sure, but then where would you go?"
Vendil: "A fair question, my friend... a fair question."

Vendil: "Good news, Adril. The next shipment from Windhelm should include the building supplies you requested."
Adril: "We'll finally be able to begin repairs on The Bulwark. Thank you."
Vendil: "If there's anything else I can do, just let me know."
Adril: "I hesitate to ask for anything else. Your family's done so much for us already."

In the Severin Manor, he can be overheard speaking to the other members of the house if you are sneaking:

Vendil: "This town bores me. How much longer must we stay in this wretched place?"
Tilisu: "If everything goes well, we won't have to stay here much longer. For now, we wait."
Vendil: "What am I supposed to do until then?"
Tilisu: "I don't know, look for someone else to hop into bed with perhaps!"

Do you know someone called Miraak?
"Do I? I was going to say no, but somehow I feel like I do. Does that make any sense?"
Is he someone here in Raven Rock?
"No, I'm sure of that. And yet... I think I had a dream of a temple, and he was there."

Geldis Sadri wants you to try his new drink.
"Not today, too many things on my mind." 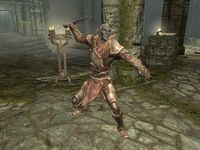 Once you get to a certain point in the quest Served Cold, his name will change to Vendil Ulen and he will permanently relocate to Ashfallow Citadel. He will now be wearing Chitin Heavy Armor with matching boots and bracers. He will turn hostile, yelling things like:

When you finally kill him, he'll utter: