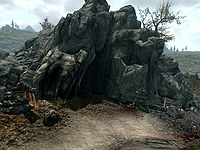 There is evidence of recent slaughter outside the cave, with bloody human and horse remains, as well as an abandoned cart, hinting at things to come. Tundra cotton and lavender grow close to the entrance.

The cave consists of two rooms inhabited by strong vampires; approach with caution. The first room is the largest and has the first of the two vampires. There is a skeleton in each corner of the room as well. Once the skirmish is finished, locate the adept locked chest in the southeastern corner. The rest of the room contains only empty decorated coffins, empty wine bottles, and skeletal remains. There are five additional sets of stairs, each leading up to a small landing. The stairs themselves lead to nothing in particular, with the exception of the second staircase on the west wall. This leads to the second room where you can expect a boss vampire.

The second room acts as the vampires' lair. The first item of note is an alchemy lab with a potion of minor healing, a weak magicka poison, and a bottle of frostbite venom. These can be found either on the table, or on the floor after the altercation with the vampire. Near to the alchemy lab will be a copy of the Lockpicking skill book The Wolf Queen, v1. Going around the periphery of the room, next is a large cage containing bloody rags, then an arcane enchanter with an enchanted sword lying atop it. A small bookcase next to the enchanter holds a copy of the Illusion skill book Mystery of Talara, Part 4, a black soul gem, and two additional soul gems. Next come to a bookcase with samples of frost salt and vampire dust. On the left-hand end table, by the double bed, is a leveled potion. The boss chest is also close to the double bed. On a raised platform are two single beds with a dresser between them. On the dresser is one of two samples of Jazbay grapes; the second can be found on the corner of the table next to the bed platform. Both of the tables in this room are set with grisly meals; the table in the center of the room serves a human heart. A salt pile is on the floor by this table.