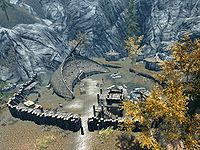 Largashbur is an accursed Orc stronghold beset by giants in the southeast of Skyrim, west-southwest of Riften.

The stronghold features a makeshift altar to Malacath, adorned with Orcish Armor, Orcish Boots, an Orcish Helmet, an Orcish Shield, an Orcish Battleaxe, and seven bunches of lavender. Largashbur is the only one of the four Orc strongholds not to have a mine, and indeed has lent two of its working-age Orcs to Narzulbur, since Narzulbur has a mine but a shortage of workers.

As with all Orc Strongholds, you must become Blood-Kin to the Orcs before you are welcome in the stronghold and able to barter or receive other services.

Two goats and a horse are found in the exterior area.