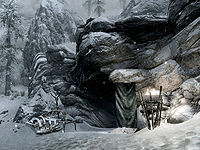 Southfringe Sanctum is a small cave occupied by the conjurer Bashnag and his coven. It can be found directly south of Fort Neugrad.

The entrance is marked by a lit brazier on a stand to the right. To the left is a table with an alchemy lab, an apothecary's satchel, and a set of robes of quickening on top. There is a spellsword working at the lab, who may be so absorbed in their work, they may be easy to sneak up upon. Prior to entering, to the north of the cave is a silver ore vein, beneath a rock overhang. Continuing to the north, by the base of a tree on the cliffs where one can overlook Fort Neugrad, a skeleton you can't interact with and an unlocked chest are found. In front of the chest is the Conjuration skill book The Warrior's Charge, and on the skeleton is an iron war axe. Due west, uphill behind a large rock outcrop, is a second silver ore vein. 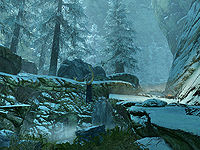 The entrance leads into a natural passage heading west. There is a lantern on the ground shortly after entering the cave; just after this lantern, behind a plant on the other side of the tunnel, there is an unlocked chest. There is a spellsword patrolling this part of the tunnel. After a few paces, you come to a pair of wooden gates in a wider passage. Use caution, as the gates have a frost rune on them. Through the gates is a huge chamber filled with trees and vegetation on multiple levels. There is a spellsword standing on a ledge to the west of the gates. From the gates, two paths lead deeper into the cave system: a path heading west, beneath the spellsword, and another rising to the northwest. This second path ultimately leads to Bashnag, the leader of this spellsword coven, while the former path leads down to a giant frostbite spider's lair, through a system of caves infested with more frostbite spiders.

Following the higher of the paths leads past two lit braziers on the ground on your right. Just past the second brazier, there's a flag on the left, by a mammoth rib cage. Turning south here then continuing forward leads to a unique fox named Pumpkin. Unfortunately, the cute little fox is hostile, and has likely eaten his last chicken as you pass through the room. There is a small novice-locked cage containing a dead chicken behind Pumpkin, with two raw chicken breasts beside the cage. Beyond this is a spellsword who is either working at an anvil or mining an iron ore vein. Beside the anvil is a table holding a pickaxe, a piece of corundum ore, a steel greatsword, a random enchanted mace, a random enchanted boots, and two leather strips. There is also a small empty tent nearby. A short distance north of the iron ore vein is a silver ore vein, and by a tree in front of this is a large urn, with a burial urn by a large tree stump farther north.

Returning to the main path and continuing to follow it as it rises, you will encounter another spellsword working at another alchemy lab. By this lab the path turns to the west, before ending at a pair of wooden gates. The gates are novice-locked, and open to reveal a path descending into an open-roofed chamber. You will find Bashnag working at an arcane enchanter at the end. He, like all the other diligent workers in this cave, may hardly seem to notice you. He carries a copy of the Destruction skill book The Art of War Magic. There is an unlocked boss chest to the right. A short distance before the enchanter, on the left and heading south, is a path that descends; to the right of the path is a small crevice in the rock wall with a lit brazier behind it. You can look through this and spy a spellsword in the room beyond. There is a second spellsword farther back, which enables you to take them out individually. The second spellsword is guarding a pair of unlocked wooden gates that block access to the beginning of the frostbite spiders' lair.

Past the gates, there are two spiders in the immediate vicinity, and an earthen bridge spanning the chamber; from this bridge you can reach a ramp leading up to two egg sacs that can be harvested. Beneath these is the passage that leads farther into the lair, and another short passage that leads to an area where you'll encounter Selveni Nethri caught in webbing. She's a necromancer who was originally part of Bashnag's coven, but after a falling out, was chased and trapped down here. This was after Bashnag cursed her, making it impossible for her to cast any spells. She asks for your assistance in helping her escape, but will only leave once you've cleared the way. There are two more egg sacs in this lower passage, one of them behind Selveni. Use caution, as there are numerous spiders in this part of the cave system. As you pass through into the next chamber, which is circular, a giant frostbite spider will descend from above. The path follows the outer wall counterclockwise around the room and descends, passing an unlocked chest wedged behind a pillar on the left near the bottom. Just after the lowest point, there is another egg sac stuck to the ceiling that you can harvest. From this point, the passage rises steeply, before several turns lead back to the start of the two paths near the cave entrance. Once the caves are completely cleared, you can return and tell Selveni the coast is clear. There is no reward for completing this miscellaneous quest.