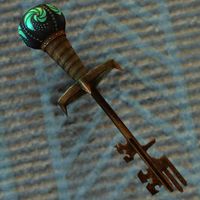 The Skeleton Key also has a secondary, less known function as being used to keep open Ebonmere, a well from which luck flows into the world. You are tasked with returning the key to Ebonmere in the Twilight Sepulcher to restore luck to the Thieves Guild. Until then, you may retain the key indefinitely for your own use.

Despite being a Daedric artifact, the Skeleton Key does not count towards the Oblivion Walker achievement, because it is not acquired through a Daedric quest.