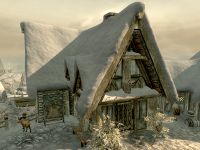 Edla's House is the home of Edla and Nikulas in Skaal Village.

Edla's house is to the north of the central square between Morwen's house and Wulf Wild-Blood's house.

To the left of the entrance on the west side of the house is a bench and tanning rack and further around a goat pen with a straw bale against the side of the house. At the rear of the house are racks for drying nets. and off to the side a small open sided shed with a barrel and a large rack with five salmon hanging off of it. There is a salmon on the ground and another hidden under a wooden block. All of these are free to harvest once you have completed The Fate of the Skaal quest. On the east side of the house is a crate. 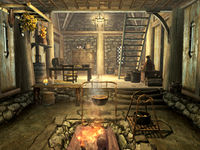 Upon entering this house you find a small fire pit with a cooking pot on a stand behind. There is a second stand with a cast iron pot containing two potatoes and a carrot to the right. On your left as you enter are a pair of shelves containing two eidar cheese wheels, a sliced eidar cheese, a goat cheese wheel, two bottles of alto wine and one of wine. Hanging from the ceiling is a flat rack with three fillets of horker meat and a joint of venison. On a second rack hanging from the ceiling are five salmon, a sample of frost mirriam and a garlic braid. Under this is a narrow table with a horker tusk on. To the right of the entrance are two more wall shelves containing two bottles of alto wine and in a wooden bowl a piece of honeycomb.

Against the north wall heading to the back of the room are three small steps underneath the flight of stairs up to the top floor. On your right, under the stairs is a pile of firewood, a crate, two sacks and a barrel. Against the south wall is a barrel and sack, beside these is a long table and two chairs. On the table is a mead barrel, bowl of venison stew, a bottle of ale, a wooden plate with a loaf of bread and two wooden bowls one contains a salmon steak, the other a rabbit haunch. In the southeast corner is a doorway to a twin bedroom. Against the back wall to the west is a wardrobe with a wooden plate containing two red apples and to the right of it a kettle containing a fillet of horker meat and a cabbage and a basket containing three potatoes. There is also a stool with a cast iron pot containing a baked potato next to a chair with a bottle of wine on the floor. Between the west wall and the stairs up is a doorway to a storage room.

On your left as you enter the storeroom is a set of shelves containing two horker tusks, a leather strip and a deer pelt. Against the north wall is a narrow table with a sack on top. Against the east wall is an alchemy lab set into a table with a shelf above it containing two potions of cure disease, a deathbell, an apothecary's satchel, a draught of strength and a sample of tundra cotton. On the left is a hanging rack with a sample of elves ear, frost mirriam and garlic braid. To the right is a sack and barrel. Against the south wall is a set of shelves containing an eidar cheese wheel, a pair of iron boots, two iron helmets and a bottle of alto wine.

Entering into the twin bedroom you will find a single bed in front of you in the southeast corner and on your left another single bed against the east wall. Above this bed is a shelf containing a bowl with two flutes inside. 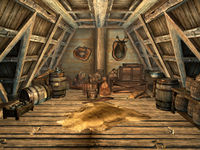 Climbing the stairs up to the top floor and it look a bit like a typical loft with all sorts everywhere. There is an open crate with three cups in. Behind that a fish barrel on it's side and an upright barrel with two plates and a cup on with a small set of shelves behind them. There are crates, bucket, and baskets all over, but none holding anything interesting. There is a woodcutter's axe on one of the crates with a pile of firewood behind it. There are three sacks on the floor and a second small set of shelves near the back containing a copy of Ahzidal's Descent and a bowl. Then there is another barrel and set of shelves off to the side.