Kagrumez is a relatively small Dwarven ruin south of the Temple of Miraak. 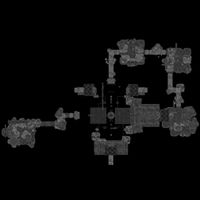 There is a sizable tent containing the body of Raleth Eldri, a dead Conjurer, and his knapsack. It seems he was so interested in studying Dwemer ruins and their attendant dangers that he failed to notice the more mundane danger of bandits: he's been killed by reavers, and some of his notes can be found on the reavers within the dungeon.

The first door requires two resonance gems. Past the first door is a Steadfast Dwarven Spider, a potential follower. The second and third doors require three and four gems, respectively. Beyond the second door is the Steadfast Dwarven Sphere, another potential follower, and beyond the third door is the unique Dwarven Black Bow of Fate. With the Arcane Archer Pack Creation installed, several Soul Stealer Arrows can be found next to the bow and must be acquired in order to learn how to craft the arrows.

This Skyrim-related article is a stub. You can help by expanding it.
Retrieved from "https://en.uesp.net/w/index.php?title=Skyrim:Kagrumez&oldid=2655934"