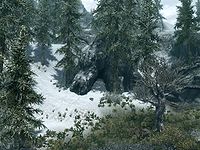 This cave system is extremely dark, so be sure to bring some source of light if you don't have a form of night vision.

The entrance to the cave is at the end of a mountain meadow which rises to just above the snowline. A few paces northeast of the entrance is a snowberry bush. There are a number of random encounters nearby, including leveled animals and Forsworn.

During Touching the Sky, if the Dragonborn has a second follower as well as Serana (possible if the second follower was acquired while Serana was waiting before entering the Soul Cairn for the first time), it is best to dismiss any follower other than Serana. Otherwise, it is possible to bring the second follower through part of the cave system, but they will almost certainly become permanently stuck somewhere along the way.

The entrance leads into a natural cave with a sparsely lit passage descending to the south. There are a couple patches of white cap fungus growing in this passage. At the bottom the passage turns west and passes a pool that is fed by a waterfall. If the Fishing creation is installed, this pool is a source of the rare Scorpion Fish, as well as one of the many locations to find a Tripod Spiderfish. Following the path west from the pool, it takes a couple of turns before passing a small ledge overlooking the water, which features a white cap fungus on the left. The passage turns south at this point. Ahead is a frostbite spider in an alcove. There is a concealed door at the back of the alcove, but no way to open it on this side. On the ground is a dessicated corpse and an egg sac, which can be looted and harvested, respectively. The path turns west at the alcove and continues to descend. A patch of fly amanita is on the right, followed by a narrow suspension bridge over a turbulent underground river. The bridge creaks and quivers as you cross and is obviously in poor condition, with one of the rope handrails missing. On the far side is a small ledge with two moonstone ore veins; one is on the ground, and the other is on the wall. There is also a small round wooden table to the right, with a pickaxe on top.

Once you have crossed, attempting to cross back again will result in the bridge collapsing and dropping you into the river below. You will be swept rapidly downstream. The only way to return to the other side of the chasm without falling into the river and having to proceed through the entire cave system is to use the Whirlwind Sprint dragon shout. This will enable you to mine the ore veins and leave.

Allowing yourself to be swept away by the river, you will be forced underwater several times during the ride, but never long enough to put you in danger of drowning. Staying above water, you will see several glowing mushrooms and a couple of frostbite spiders. Eventually, you will drop over one final short waterfall and be deposited onto a wide rocky stream bed. Here two frostbite spiders soon followed by three more will converge and attack. On a pillar ahead are several more glowing mushrooms. Heading downstream, you will see raised banks on either side. On the right side are two more egg sacs that you can harvest, and just past these is a large perfectly circular hole in the wall lined with cobwebs. A giant frostbite spider is in this alcove. Once you have dealt with the spider, at the back of the alcove is an unlocked chest and a skeleton you can loot. There are a few web sacs in the water and on the ceiling outside the alcove, and several more glowing mushrooms on the walls. The stream passes under the cave wall and the path turns west, before turning north again by a lit brazier; the route also narrows and begins to climb.

At the top, an extinguished campfire is ahead, and to the right is the body of a dead Breton woman with a lit torch beside her. On the corpse is a note which explains a little about why she was here. The camp has been set up at a crossroads; your approach is from the south. An unlocked wooden chest containing three more torches and other loot, an unowned bed roll, and a small table are also beside the fire. On the table are two random potions of resist fire, a cure poison potion, a satchel, a steel dagger, three spider eggs, and a medium coin purse. To the left of the table on the east wall is a concealed door, which acts as a shortcut to a large chamber deeper within the cave system. There is a lean-to and another bed roll to the north. Behind the lean-to is a chain which operates the concealed door. Returning south of the campfire, there are passages to the east and west. The path to the west ascends, and after a couple of turns enters a small chamber with a spiraling path leading up. A total of three bleeding crown and one white cap fungi as well as several hanging moss grow in this chamber. At the top the passage ends at a dead end, where a chain to the left opens the nearby concealed door connected to the alcove with the spider near the cave entrance.

Following the blood-soaked path to the east of the campfire as it descends, a tripwire triggers a rockfall from behind near the top of the passage. After several turns, you will pass three glowing mushrooms on the left followed by two more on the right. The path then opens into a large chamber with several pillars of rock, various ledges, and a large ankle-deep pool of water. Two trolls wander near the north wall, and in the northeast corner is an unlocked chest, with gory human remains and a lit torch on the ground beside it. There are a few glowing mushrooms around the chamber and many hanging moss growing from the ceiling, but little of interest. To the southwest is the passage connected to the shortcut from the camp, with a glowing mushroom near the concealed door on this side. Near the passage are several broken stone pillars and what appears to be the roof of a small six-sided structure with unfamiliar architecture. Prior to beginning the quest Touching the Sky, two more trolls will occupy the west end of this chamber. After killing them, you can exit the cave by returning to the campfire crossroads through the nearby concealed door, then following the passage ascending to the west through the other concealed door.

However, if you have started the quest, the trolls to the west are replaced by the armored snow elf Knight-Paladin Gelebor and his crude camp. The camp consists of an unowned bed roll, a lean-to covering a rough sideboard holding clutter, a small table also holding minor items, and a Shrine of Auriel which grants a fortify marksman blessing. As you approach, Gelebor will address you. After a short discussion, he will raise the six-sided structure to reveal an empty basin in the middle and give you the initiate's ewer. The wall behind the basin then becomes a dark shimmering portal that transports you directly to the beginning of Darkfall Passage. 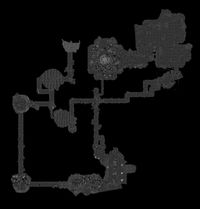