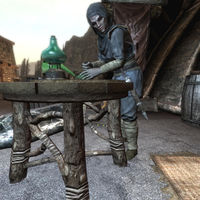 Milore Ienth is a Dunmer apothecary located in Raven Rock, living on her farm with her husband Garyn. She provides expert level training in Alchemy. She grows or harvests most of her own ingredients, of which she has a vast array.

Milore Ienth wears a pair of Dunmer shoes and a Dunmer outfit. She wields a steel dagger to defend herself and carries a key to her house on her person. Milore will also carry a variety of lower-class items and gold.

Milore starts her day at 6am when she gets up from her bed. She will allow herself two hours for breakfast before heading outside to the alchemy lab outside of her home to sell her wares. Milore will continue to provide her market services until 8pm, at which time she will head back inside to work at the alchemy lab inside her home. She will continue to brew potions until midnight, when she will either head to the Earth Stone (where she will be entranced and unable to engage in conversation) or if the stone has been cleansed, retire to her bed for the day. She will wake up at 6am the next day to repeat her schedule.

She will often mention her ingredients, saying, "Looking for any potions? Ingredients? Alchemical supplies?" or "If you're looking for any exotic ingredients, just ask. I might have what you need." She also might mention her husband, saying, "My husband Garyn maintains our farm. Without him, Raven Rock would likely go hungry." When she gets free from Miraak's control, she'll express her gratitude, saying, "You sure showed Miraak who's in charge around here!" She'll also be a bit spooked about having her mind controlled, saying, "Just thinking that some madman was inside my mind. Gives me shivers just thinking about it." When you stop the ash spawn attacks, she'll be thankful, "Destroying the ash spawn has made it safer to work in the fields. Thank you." If you reopened the mines, she'll once again be thankful, "I don't know who sent you here, but you've given us something to build on here. I hope someday we can repay you for your kindness."

When asked how Raven Rock has needed her and her husband's help, she responds, "As you can imagine, the eruption of the Red Mountain took an awful toll on Solstheim. Hunting for game has been scarce, and the waters are apparently too tainted for fishing. According to Councilor Morvayn, my husband's been Raven Rock's most important food source for decades." When asked where she learned alchemy, she'll tell her story, "After we left Morrowind, we found ourselves in Skyrim. We wandered around a bit and ended up in Morthal where we took temporary residence with Lami, the town's alchemist. I was fascinated by her work, and over a period of a few years she taught me quite a bit." When asked why she left Morthal, she'll explain, "It wasn't long before we became homesick... we were the only Dunmer in Morthal. When word reached us that a settlement of Dunmer was forming on Solstheim, we were thrilled. It's been difficult, but I'm not regretting it one bit. In fact, I'm glad we've been able to stay and help." When she's asked if she knows someone named Miraak, she'll be confused, saying, "I don't think so, though it sounds like a name I've heard before..." When asked to elaborate, she'll stay confused, "I hear that name, and I see a temple, here on Solstheim. What could that mean?" When asked if she wants to taste Geldis' sujamma, she'll get some alchemical ideas, saying, "I should mix some of this into my next potion... who knows what would happen!" When exiting conversation she may remark, "Remember, I have plenty of potions and ingredients if you're ever in the market."

When you observe the amount of exotic ingredients she has, she'll then tell you about a problem she has, "Yes, I'm proud to say that I grow or harvest most of it myself. I only wish I had a better source for netch jelly. Those creatures are difficult to track down since it's so dangerous beyond the Bulwark." If you already have five samples of netch jelly, you can give them to her granting a surprised response, "My goodness, you're quite resourceful aren't you? This is all I can offer in return for this. I hope it's enough." If you tell her fetching netch jelly sounds risky, she'll say, "Well, I have these other ingredients for sale for now. It'll have to do." If you offer to gather some, she'll be delighted, saying, "That would be splendid! I'd be more than happy to give you something for the effort." When you have yet to gather the jelly, she may say, "Careful with those netches... they may look tame, but they can seriously hurt you when threatened." When you gather the jelly, she'll say, "Goodness, it must have been quite difficult tracking those creatures down out there. Here, take these. They should help you during your journeys."

Milore can often be seen talking to her husband or other Raven Rock citizens:

Milore: "Garyn, did we make the right decision coming here?"
Garyn: "We tried to start a new life on the mainland, remember? It was too dangerous. Vvardenfell isn't ready."
Milore: "Things seem just as bleak here."
Garyn: "We'll pull through, I promise. Councilor Morvayn would never let us down."

Milore: "Are the ash yams growing like you expected this season?"
Garyn: "They're incredible. I don't know how we ever got them to take in this soil, but I'm glad they did."
Milore: "Well, we had to do something. I'd rather starve than eat another one of those horrid turnips."
Garyn: "Well, if we keep having harvests like this, you'll never have to eat one again."

Garyn: "Gjalund said our customer in Windhelm wants more of that balm."
Milore: "Damn. I'm still low on netch jelly. He might have to wait until next month until I can gather some more."
Garyn: "I don't want you hunting them again. You almost got killed last time."
Milore: "Don't worry, my love. I'll find a way."

Milore: "How's business today, Fethis?"
Fethis: "Haven't sold much. It's going to be a long time before things ever get back to the way they were... if ever."
Milore: "Have faith. Things will change for the better."
Fethis: "Thanks, Milore. I appreciate that."

Fethis: "Milore, I've finally gotten that letter back from the East Empire Company."
Milore: "Gods. Not this again."
Fethis: "What's that supposed to mean?"
Milore: "Fethis, they doesn't care about us. If they did, we wouldn't be standing ankle-deep in ash trying to sell a few meager trinkets to survive. They just send you those promises to keep you off their backs... you must know this."
Fethis: "Sorry, I... Never mind."

Mogrul: "Milore, you need to talk some sense into your husband."
Milore: "You can't get blood from a stone, Mogrul. As it is, we can barely make ends meet."
Mogrul: "That isn't my problem. I was clear when I loaned Garyn the money that I wanted it back by the first harvest."
Milore: "I'll see what I can do..." 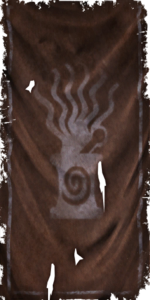 This is the merchandise found in Milore's merchant chest. These items are only available if purchased from the merchant; they cannot be pickpocketed or stolen. They are restocked every two days.