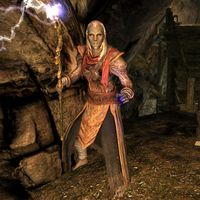 Ildari Sarothril is an insane Dunmer conjurer living at Highpoint Tower. She is a former apprentice of Neloth, but now bears a grudge against him and is responsible for the ash spawn attacks on Tel Mithryn and the withering of the tower. She wears Telvanni robes with a heartstone necklace, and she carries a Dwarven dagger and a Staff of Lightning Bolts.

She can be a powerful opponent in battle, using the Destruction spells Ice Storm and Thunderbolt against you, and she can also conjure a flame, frost, or storm atronach depending on her level. She improves her armor rating with the Alteration spells Stoneflesh, Ironflesh, and Ebonyflesh, all of which are strengthened by her Mage Armor perks. She also uses the Restoration spells Lesser Ward, Steadfast Ward, and Greater Ward, as well as Fast Healing.

This Skyrim-related article is a stub. You can help by expanding it.
Retrieved from "https://en.uesp.net/w/index.php?title=Skyrim:Ildari_Sarothril&oldid=2118077"
Last edited on 1 March 2020, at 04:41