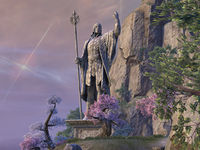 A statue of Syrabane on the island of Artaeum

Syrabane, the Warlock's God,[1] is an Aldmeri god-ancestor of magic, notable for aiding Bendu Olo in the Fall of the Sload. Through judicious use of his magical ring, Syrabane saved many from the scourge of the Thrassian Plague.[1][2] It is said that the ring remains under the command of "Archmage" Syrabane.[3] He is also called the Apprentices' God, for he was a favorite of the younger members of the Mages Guild.[1] A grand statue of him is said to stand on a coastal cliff of Artaeum, which he allegedly posed for in-person.[4] He eventually became revered as a god as Altmeri society developed.[5] Worshipers of Syrabane often carry blessed crystal likenesses of the Warlock's God to ward off curses and diseases.[6]

A Snow Elf temple was dedicated to his worship.[7] It is unknown whether Bretons of the Systres Archpelago venerate him as a deity or as prominent historical figure, but statues and numerous figurines of Syrabane were found on the archipelago.[8][9]