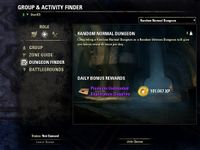 Grouping with other players is an important aspect of Elder Scrolls Online, and is often necessary to complete group content. Unlike player guilds or friends, groups are temporary, character-bound, and (in PvP zones) Alliance-restricted. Grouping provides a 10% Experience bonus to everyone in the group. Each group has a leader, identified by a crown icon. Fellow group members can be identified by an arrow icon. Groups come in two sizes:

Once a group leader reaches Level 50 and unlocks Veteran content, the option to switch the group between Normal and Veteran mode becomes available. This option determines which version of a Group Dungeon (or Dragonstar Arena, Blackrose Prison, and Maelstrom Arena) the group enters. Group Dungeons also scale to the level of the group leader. The number of players in a group dictates the amount of experience received. A group of two actually receives bonus experience compared to solo play[verification needed], but the returns decrease as more players join.

The Group & Activity Finder replaced the Grouping Tools in Update 9. The Role selection between Tank, Healer and Damage is now required, and is designed to create balanced groups for certain activities. It is no longer possible to passively search for groups for World, Alliance War and Trial activities, and the group search for Dungeons has been moved into the Dungeon Finder tab.

In addition to the Dungeon Finder, the Activity Finder also includes sections for Group settings, Endeavors, the Zone Guide, and access to Battlegrounds.

The Dungeon Finder is a special grouping tool for running Group Dungeons, sometimes referred to as "pick-up groups" (PUGs).

If you already formed a group using the Dungeon Finder but are short one or two members, you can add your group to the Group & Activity Finder and it will fill the missing slots. In this case: