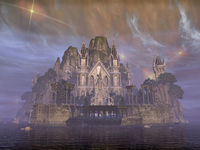 Grand Psijic Villa is a large player house in Artaeum. It is accessible through a portal on the southern shore of Artaeum, which you can reach via the College of Psijics Ruins. This house was rewarded for free to owners of Summerset who logged in at any point between their initial purchase of the Chapter and the conclusion of the Summerfall Event, albeit without furnishings. It was re-released in the Crown Store for a limited time in 2019, and again in 2021 from February 11th to February 25th.

It features an expansive outer courtyard and a large inner grand hall.

Includes the above, in addition to:

This Elder Scrolls Online-related article is a stub. You can help by expanding it.
Retrieved from "https://en.uesp.net/w/index.php?title=Online:Grand_Psijic_Villa&oldid=2352333"
Last edited on 4 March 2021, at 19:04