The Sandgrubber Tribe is a tribe of Goblins. They are located in Divad's Chagrin Mine.

The Sapiarchs are a group of Altmeri mages and scholars. They can be found throughout Summerset Isle, particularly at the College of Sapiarchs and the Crystal Tower. The Sapiarchs play a key role in the main questline of the Summerset chapter. For more information, see the lore page.

The Scaled Court are a faction aligned with the Celestial Serpent. They emerged across Craglorn after the constellations ominously vanished from the night sky.

The Sea Drakes are a large band of pirates on Stros M'Kai who have sacked the town of Saintsport and taken it over. They are hostile and will attack anyone who comes near. Their ship, the Bloody Witch, is docked in Saintsport. A Letter to Headman Bhosek claims that the Sea Drakes have held Stros M'kai's only lighthouse for over a year. During that time, 18 ships have run upon the rocks. Captain Helane has had her crew sabotage the lighthouse to plunder the ships that inevitably wreck without the lighthouse to guide them.

The Sea Vipers are crews of Maormer who attack the coastlines of Auridon, Greenshade and Khenarthi's Roost. They formed an alliance with the Veiled Heritance with the promise of lands if the Aldmeri Dominion was dismantled.

The Seamount Clan are a clan of Orcs living on Betnikh. They are based in Stonetooth Fortress but control the island.

The Seventh Legion is one of the legions of the Imperial Legion, and is led by the Magus-General Septima Tharn. The Seventh Legion mainly operates in Bangkorai and the surrounding regions. It has allied with Molag Bal.

The Shadow Walkers are a clan of Bosmer in Coldharbour. They have made a vow of service to Molag Bal, and are in a state of constant conflict with Queen Fah'jik and her clan of lamias.

The Shadowed Path is a cult of necromancers devoted to Molag Bal. Its members can be found all across Cyrodiil.

The Shadowscales are an organization of Argonian assassins from Black Marsh. Those Argonians born under the sign of the Shadow are given to the Dark Brotherhood at birth to be trained as professional killers. Although they worship Sithis and obey the Brotherhood's tenets, the contracts given to Shadowscales serve only to aid the Argonian people, and they act with impunity in Black Marsh.

The Shadowsilk Tribe is a goblin tribe found in Stonefalls. In their efforts to gain control of the region, the Daggerfall Covenant took over many of their caves, forcing them to attack nearby settlements.

The Shark's Teeth are a group of pirates in Hew's Bane. They are fighting for control of Shark's Teeth Grotto against rival pirates the Wake Walkers. The size and might of the group may have been slightly exaggerated by the leader, Shalug the Shark.

The Sharp Stick Tribe are goblins who can be found at the Sharp Stick Camp, an unmarked location halfway between Tribune's Folly and the Strid River Wayshrine in the Gold Coast.

The Shatul Clan are a clan of Orc echatere herders and hunters based in the Wrothgarian mountains of northern High Rock.

The Silken Ring are a hostile group of rogue assassins found within the Cradle of Shadows. Founded by ex-Morag Tong member Dranos Velador, they worship Mephala and serve the Lady of Lace. Members of the Morag Tong and the Dark Brotherhood (including several Shadowscales) have been lured into her service.

The Order of the Silver Dawn are a group of werewolf hunters. They were formed in 2E 428 during the Curse of the Crimson Moon, when werewolves were very prevalent in High Rock. They believe werewolves to be cursed and have sworn to eradicate them. 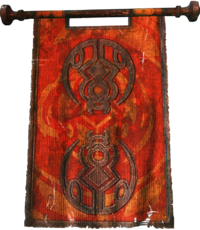 The Sixth House, also known as House Dagoth, is what remains of the ancient, defunct, Sixth Great House of the Chimer, led in ancient times by the currently sleeping demi-god Dagoth Ur. The current members are descended from the bloodlines of those who were originally part of the House, and seek to reclaim their roots at the Forgotten Wastes, the grounds of the House's capital stronghold.

Society of the Dragon are a cult of Akatosh located in Kvatch. They have rather violent ways of dealing with those who disagree with their beliefs.

The Sovngarde Nords are warriors from the coldest reaches of Skyrim who have come to fight in the Dragonstar Arena. They are faced in the Frozen Ring, the second arena round. One of the bosses, Yavni Frost-Skin, will be encountered again in the Champion's Arena, the final round.

The Spider Cult are a group of Mephala worshippers of various races found within Fungal Grotto I and II.

Spinners are Bosmeri storytellers and historians. For more information, see the lore page.

The Spirit Wardens are a group of Azura worshippers in Stormhaven. They were founded by Abbot Durak who was following Azura's instructions to found an order of worshippers, who would prepare for the time Vaermina struck the people of Stormhaven with a plague of nightmares.

The Star-Gazers are an order of scholars devoted to the study of the stars and the meaning of their motions. They are based in Belkarth, a major settlement in the Craglorn region.

The Stonechewers are a tribe of goblins that are invading Cumberland's Watch.

The Stonefire Cult are worshippers of Molag Bal. Led by Javad Tharn, they rank among his most loyal supporters and are entrusted with some of his most difficult tasks. They can often be encountered terrorizing Reaper's March, sometimes collaborating with the Legion of the West Weald. They also have a presence in the Deadhollow Halls, and in Stonefalls.

The Stonetalon Clan is one of three Reachmen clans invading the Rift. They are a matriarchal society whose females are transformed into hagravens. All females not yet transformed are powerful mages.

The Storm Lords are one of three factions you can fight for in the Battlegrounds.

The Storm Sharks are a group of Maormer pirates led by Admiral Viscarne. They attempt to invade Summerset, attacking Sea Keep, Sunhold, and Wasten Coraldale. They are a chapter of the Pyandonean Armada, like the Sea Vipers, and follow the orders of King Orgnum

The Stormfist Clan are a group of Nordic warriors loyal to Fildgor Orcthane. Once a highly regarded clan, known for their fighting skills and pivotal roles in conflicts, they fell from grace for supporting Fildgor's claim to the throne of Eastern Skyrim.

The Stormwardens are a group dedicated to protecting and using the Sphere of Storms to protect mer.

The Sun-Eaters are a clan of Vampires who worship Sithis beneath their matriarch, priestess Shuxaltsei. They inhabit the Teeth of Sithis, the largest known temple to Sithis. A group of Blackguards recently attempted to loot the temple, leading to a good chunk of their numbers being turned by the Sun-Eaters.

The Supremacists are a band of Altmer who are hiding Ambassador Tarinwe in the Middens of Elden Root.

The Su-Zahleel is an Argonian tribe whose members have been enslaved and brought to the Ruins of Mazzatun in Shadowfen by the Xit-Xaht tribe. You must help Heem-Jas free them from their enslavement during the related quest.

Sword-Disciples are warriors dedicated to mastery of the sword. They have some links to the warriors of the Valley of Blades.

The Sword-singers were an order of Yokudan warriors who followed the "Way of the Sword", a martial philosophy on blade mastery. Singers were capable of astonishing feats of swordsmanship, and were viewed by some to be as much mages as warriors. They sought strength of body, and of mind. Although the tradition of sword-singing originated in Yokuda, it was brought to the shores of Tamriel by the Ra Gada in the First Era. The sword-singers were instrumental in claiming the entire province of Hammerfell and establishing a new homeland for the Yokudan people. The most accomplished sword-singer in history was Frandar Hunding, whose writings on the subject were revered by the Redguards centuries later. For more information, see the lore article.

The Sword-singers can be encountered primarily as spirits or skeletons, in areas such as HoonDing's Watch and The Valley of Blades. Sai Sahan sought to revive the art of sword-singing, but was unable to do so.