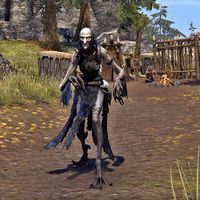 Hagravens are creatures resembling a cross between a woman and a bird. They are often associated with various Reachmen clans and can usually be found in the various places that they operate.

Hagravens are known for their magical abilities and often use flame magic in combat. Getting hit by their attacks may apply the "Burning" effect which does minor flame damage over time on top of the damage done by the spell.

Flare
The hagraven shoots a fireball as a basic ranged attack.
Firebomb
The hagraven summons a pool of fire under your feet. Move out of the red circle to avoid this.
Raven Storm
The hagraven sends a fiery tornado out towards her enemy. This attack will do high flame damage as well as stagger any player hit by it. This spell can be interrupted to set the hagraven off balance or simply avoided.
Teleport
Hagravens will teleport away from nearby enemies as they prefer to engage at range.
Briarheart Resurrection
Hagravens in Wrothgar are known to practice a special form of necromancy and are able to resurrect any Winterborn that have recently been killed as Briarhearts. Unlike the creatures summoned by necromancers elsewhere, the resurrected Winterborn will not die if the hagraven who cast the spell is killed. When facing multiple enemies, the player should kill the hagraven first to prevent this.

This Elder Scrolls Online-related article is a stub. You can help by expanding it.
Retrieved from "https://en.uesp.net/w/index.php?title=Online:Hagraven&oldid=2668366"