The Dark Elves of Morrowind have five Great Houses. Once, long ago, there was another... but it has been erased from official histories, and no one dares speak its name. 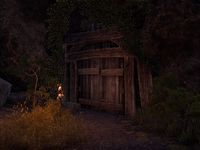 The Forgotten Wastes are a public dungeon found near the northern coast of Vvardenfell.

The dungeon is divided into several sections: a large overland area containing the stronghold of Kogoruhn, the Drinith Ancestral Tomb, the cave of Kora Dur, the Forgotten Depths, and the Caverns of Kogoruhn.

There are three achievements associated with this location:

This Elder Scrolls Online-related article is a stub. You can help by expanding it.
Retrieved from "https://en.uesp.net/w/index.php?title=Online:Forgotten_Wastes&oldid=2239653"
Last edited on 15 November 2020, at 01:33