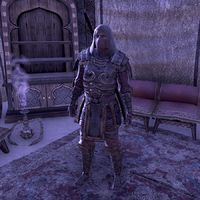 Gaiden Shinji is a legendary Redguard swordmaster from the First Era, and the founder of the Imperial City Arena. He died during the siege of the first Orsinium.

When you first enter Tamahl's Memory, you'll witness a scene between Lord Trystan and Gaiden Shinji:

Lord Trystan : "Baloth Bloodtusk has reinforced Orsinium. Our losses to his Savage Sons were … considerable."

Gaiden Shinji : "Your king should call off the siege. The battle is unjust."

Lord Trystan : "Shinji … Mercedene now commands us. The siege will not end."

Gaiden Shinji : "Mercedene? The Beast of the Reach is your general?"

Lord Trystan : "There's another way. Challenge Baloth to a duel. You could end the siege with a swing of your blade."

Gaiden Shinji : "What would your king say? He appointed Mercedene."

Lord Trystan : "King Joile suggested this. He needs a victory, and won't care who delivers it."

Gaiden Shinji : "Then it shall be. The Order of Diagna will march to Orsinium."

When you speak to Gaiden Shinji:

"Do you see how King Joile forces my hand? If I refuse to challenge Baloth Bloodtusk, the Breton king will demand Lord Trystan do so in my place. My obedience, or my friend's life.
This is what kings call "leadership.""

"No.
I do not slight Lord Trystan. He leads the Knights of the Dragon—his honor and skill with a blade are without question. But Baloth Bloodtusk will see that, and use Trystan's honor against him."

"The Orcs claim him a warrior without equal. Of more importance, so do his opponents.
Cunning, quick, and patient—he bides his time and then strikes. A style that adapts to his opponents."

How can you face Baloth if he does not fight with honor?

"There are few left with skill to match my own, so the duel itself is an honor. After all, doesn't honor wear the face of your next opponent?"

Unless he's your final opponent.

"Ha! You've spent too much time around me, Tamahl."

Speaking to him before leaving the memory, he'll say:

"I shall miss this place. Each day a bed of burning coals, each night a plunge into cool water. It has tempered me, as … uh ….
Don't write that one down. I'm still working out the metaphor."