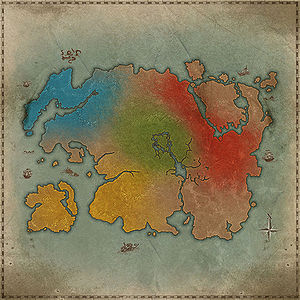 Black Marsh is a dense swampland region of southeastern Tamriel, home to the reptilian humanoid race of Argonians and a race of sentient trees known as the Hist. Mer races also use the name Argonia, a reference to an obscure ancient battlefield, to avoid the negative connotations of the term "Black Marsh". Argonians thrive in the foreboding swamps of Black Marsh, a lush and threatening land teeming with poisonous plants and violent predators. The region's tropical climate lends its plants the capacity to overturn all attempts to cultivate them. Foreign agricultural, colonial, and commercial ventures beyond the slave-trade have met with abject failure. The native Argonians organize themselves on the tribal level with success and efficiency, and were only loosely integrated into the ruling Empire.

The alpha map and master text file places the planned zone of Thornmarsh within Black Marsh.

This article is about the general province. For the zone, see Cyrodiil.

Cyrodiil, also known as the Imperial Province, Dragon Empire, Starry Heart of Nirn, and Seat of Sundered Kings, and Cyrod in Ayleid, is a province in the south-central region of Tamriel, and the home of a humanoid race known as Imperials. The center of their Empire and seat of governance, Cyrodiil is also known as "the Heartland". The capital of Cyrodiil, and of the whole empire, the Imperial City, is located on City Isle in the center of the province, which bears the location of White-Gold Tower, possibly the most renowned monument of Tamriel. Despite some accounts describing Cyrodiil as a jungle, it primarily has a temperate climate. One scholar of the middle Second Era attributed this discrepancy to errors made during the transcription of historical texts, while another speculated that White-Gold Tower itself gradually adapted the climate to suit the region's inhabitants. Later sources asserted that Emperor Tiber Septim altered Cyrodiil's climate upon his apotheosis.

Varen's Wall Gatehouse calls the area beyond the Colovian Estates. The alpha map and master text file place the planned zones of Nibenay within Cyrodiil.

This article is about the province. For the Chapter, see Elsweyr. 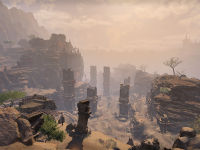 Elsweyr is a region that lies on the southern coast of Tamriel, and is home to the feline Khajiit. It is divided into two major climates: savannahs, badlands and dry plains in the north, and fertile lands of jungle and rainforests in the south. Over the ages, many kingdoms ruled over the region—starting with the ancient Sixteen Kingdoms, over to the two kingdoms of Anequina and Pellitine, them united into the Elsweyr Confederacy, and once more separated in two kingdoms in the Third Aldmeri Dominion.

For more information, see the complete article at Elsweyr. 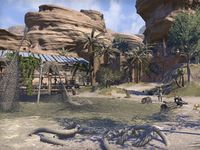 Hammerfell is a province in the west of Tamriel, bordering Skyrim, Cyrodiil, and High Rock. This province is dominated by the wasteland of the Alik'r desert. It is inhabited by the human race of Redguards, who fled to Tamriel after their home, Yokuda, was destroyed.

The alpha map and master text file places the planned zone of the Weeping Desert within Hammerfell. 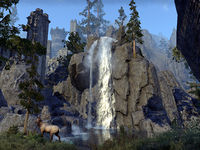 High Rock is a province in the northwest section of Tamriel. Most of the province is inhabited by the Bretons, who have divided the province into multiple Breton city states and minor kingdoms.

Virtually the entire province is in the game, besides the sliver of land between Wrothgar and Western Skyrim.

This article is about the province. For the Chapter, see Morrowind.

Morrowind, previously named Dwemereth, Veloth, Resdayn, and Dunmereth, is the province in the northeast corner of Tamriel, and the home of the Dunmer. It is dominated by the large island of Vvardenfell and its centerpiece, the ash-spewing Red Mountain, but also includes territory on the continental mainland. The Inner Sea separates Vvardenfell from the mainland, and the Sea of Ghosts lies to the province's north.

This article is about the historical province. For the storyline, see Dark Heart of Skyrim. 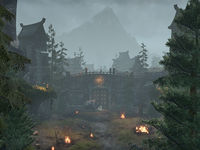 Skyrim, the northernmost province of Tamriel, is a cold and mountainous region also known as the Old Kingdom, Mereth, or the Fatherland, or Keizaal in the dragon tongue. Many past battles have given it a ravaged appearance and many ruins. Though currently inhabited primarily by Nords, the Elves who they replaced had resided there since time immemorial. The sovereign, the High King of Skyrim, is chosen by the Moot, a convention of jarls. A jarl is a regional ruler chosen through heredity and, rarely, through right of arms. The High King typically rules until death, though acts of dishonor, particularly the appearance of cowardice, can lead to the recall and reconsideration of the Moot. Since the Pact of Chieftains was signed in 1E 420, the Moot does not give serious consideration to anyone but the High King's direct heir unless one is not available.

For more information, see the main Lore article. Areas considered part of this province are:

The subterranean caverns of Blackreach also stretch beneath the province.

The Summerset Isles (sometimes spelled Sumurset, Summurset or Sumerset) is a province in southwest Tamriel consisting of fourteen islands of varying size. The three largest and most significant islands are Summerset Isle, Auridon, and Artaeum, the latter of which is apt to disappear for sizable lengths of time without warning. In 4E 22, the Thalmor seized power and renamed the province after its capital, Alinor, though many outside the province still refer to it as Summerset. The current inhabitants of the province are the Altmer, though goblins were there when the elves first arrived. It is believed that the first inhabitants were the Sload before they were driven away by the Aldmer, whom the Altmer claim to be directly descended from.

For more historical information, see the lore article. Areas considered part of this province are:

Valenwood is a densely forested, sub-tropical region that encompasses the southwestern coastal plain of Tamriel. In the words of A Pocket Guide to the Empire, Valenwood is "a sea of endless green, a maze of foliage with half-hidden cities growing like blooms from a flower, the home of the Bosmer is Tamriel's garden." One unusual feature of Valenwood is its gigantic, migratory trees, many so large that the Bosmer have built entire cities in their branches. Falinesti is one such tree, a mile-high specimen that serves as the capital of Valenwood and seat of its kings.

For more information, see the complete article on Valenwood. Areas considered part of this province are:

Virtually the entire province is in the game, though the planned starter island of Rictus in the southwest was cut.