The Crystal Tower is a large structure found on the northern tip of Summerset. A sacred monument known to the Altmer as Crystal-Like-Law, it is both a place of research and a mausoleum for the honored dead. Opening only to the Sapiarchs' tower sentinels, the tower holds a mysterious powerful crystal called Transparent Law at its apex. The Tower is also said to exist in more than one plane of existence.

The Fields of Regret

During The Crystal Tower, you must cross the Fields of Regret to enter the Tower. 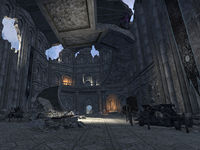 The Museum is the lowest portion of the tower. You can see the Fields of Regret outside the window. Sapiarch Nolyemal can be found here. 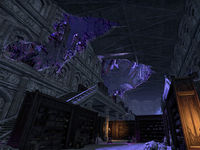 The Library is the next section of the Tower. You can see the Spiral Skein outside the tower. 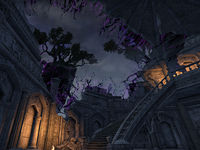 You can see the Evergloam outside the tower. 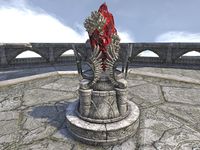 The purified Heart of Transparent Law

Nocturnal is attempting to corrupt the Heart of Transparent Law here. 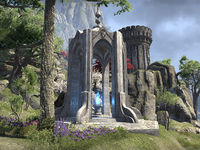 The Crystal Tower Wayshrine is located west of the Crystal Tower. A dog is standing next to the wayshrine. The merchant Hanursae runs the Beachcomber's Bazaar along the side of the road nearby. She is accompanied by her horse. A heavy sack is on the front of her cart.

This Elder Scrolls Online-related article is a stub. You can help by expanding it.
Retrieved from "https://en.uesp.net/w/index.php?title=Online:Crystal_Tower&oldid=2470691"