Come to me, Mara, for without you, I might forget the ways of our fathers, and preening by the light of latest fashion, my words might tremble like the thin reeds of novelty in the tempest of enthusiasms — Pocket Guide to the Empire, 3rd Edition

In the Merethic Era, Mara was originally worshipped simply as a fertility goddess,[10] but the sphere of the Divine later extended to agriculture and love. Nir, the female principle of the cosmos credited as the mother of creation, is occasionally associated with Mara as a result of her role as the goddess of fertility and agriculture.[6] Mara is considered a near universal deity as the Divine is featured in the pantheons of all the races of the continent of Tamriel save the Dunmer and Argonians.[8]

According to the creation myth presented in the Anuad, Mara and the Aedra (gods) were born from the mingled blood of Anu and Padomay, the good and evil primal forces, respectively, and therefore have a capacity for both good and evil, in contrast to the Daedra, who were born from the blood of Padomay, and thus are only evil.[11] The creation myth of the Khajiit acclaims Mara as the Mother Cat and describes the Divine as the daughter of Ahnurr (Anu) and Fadomai (Padomay).[12] The formation of Akatosh, the Dragon God of Time, from the mingled blood of the brothers Anu and Padomay facilitated the formation of Mara and the gods as they learnt to structure themselves.[13] Shezarr's Song, a Cyrodiilic creation myth, acclaims the creation of Mundus to the sacrifice of Mara and the gods whose sacrifices were embodied as eponymous planets.[14][15] Mara and the gods were subsequently bound to the Earth Bones as a result.[14] The moons of Masser and Secunda are claimed to be the embodiment of the lovers Mara and Shandar, respectively, as created by the Divine.[16]

Different cultures attribute different relationships between Mara and the other gods. The Nords of Skyrim consider Mara a handmaiden of Kyne and concubine of Shor (Lorkhan).[6] However, the Bretons, Altmer, and Bosmer consider Mara to be the wife of Akatosh or Auriel to the Elves.[10][17][18] Other faiths acclaim Mara as the wife of Lorkhan or concubine of Akatosh, or, in some cases, concubine of both.[8] In Ark'ay, the God of Birth and Death, Mymophonus the scribe claims that Mara deified Arkay, the God of Birth and Death, so to allow him to teach mortals the necessity of life and death.[19] In the First Era, the Divine punished Sai, God of Luck, and deprived him of his body for his failure to uphold his pact with Ebonarm, God of War, to spread luck throughout Tamriel in the gods' absence.[20] St. Alessia consulted Mara during her slave revolt against the Ayleids in the First Era.[21] The Warp in the West, also known as the Miracle of Peace, in 3E 417 is acclaimed as the work of Mara, Akatosh, and Stendarr.[22] It is unknown if Mara successfully destroyed the Skull of Corruption, a daedric artifact, in 4E 201.[23]

As Goddess of Love, Mara is the bearer of love,[24] and shines the light of love on all mortals.[25] Mara gave life to mortals so that they may love.[26] The gift of love was bestowed upon mortals by the Divine so to honor Mara,[26] and allow them to understand the true nature of the Divines.[24] Mara teaches that love provides nourishment and life to all mortals.[24] The Divine commands mortals to "live soberly and peacefully. Honor your parents, and preserve the peace and security of home and family".[27] Mara's Benevolence is eternal and those who offer their love to the Divine will never be forsaken.[28] The Warmth of Mara shapes the destiny of mortals and can be felt across Tamriel.[28] Priests of Mara teach that the Divine is omnipresent and her love and affection can be found in the heart of all mortals, thus linking them to Mara.[29] The holy truth declares that love creates life and therefore those who love create more life.[26]

Mara is also the patron of marriage,[24] and the act of union is carried out at her shrines and temples.[30][23] The Divine teaches that the spark of union between two mortals comes from within and is not based on appearance.[24] The oaths and vows of marriage create life from love and are respected in the name of Mara.[26] The act of union is confirmed upon taking the Pledge of Mara and Mara does not place any restrictions on marriage, thus all may marry, irrespective of gender and race, and unite their souls in the holy union.[1] Mara makes her will known to her priests through visions and commands them to aid those whose love needs guidance.[23] The priesthood of Mara strive to unite all mortals and are intolerant of those who are intolerant of others.[31]

The majority of the population of the province of Black Marsh venerate the Hist, and, in the Second Era, worship among the Argonians of Black Marsh of Mara and the gods was limited to a small minority of those who had assimilated to the culture of the Empire.[32] Imperial missionary efforts in the province in the Third Era were unsuccessful as missionaries died from local diseases, such as at Umpholo, where a Temple of Mara was constructed.[33] Mara is known to have been worshipped as a member of the pantheon of the Kothringi, the indigenous humans of Black Marsh, and was considered one of their three "mothers in the Around-Us", as well as Dibella and Kynareth.[UOL 1]

The Imperials of the province of Cyrodiil venerate Mara and the Divine is considered part of the Cyrodiilic pantheon.[8] A Benevolence of Mara, a cathedral dedicated to the Divine, was located in the Imperial City, the capital of the province, in the late First Era, under the Reman Dynasty.[34] In the 5th century of the Second Era, the Imperial City was also home to a Yokudan chapel in the Market District which contained a shrine to Morwha shaped like a beehive.[35] A Temple of Mara, and later Great Chapel of Mara, is known to have been located at Bravil in the Second and Third Eras, respectively.[30][36] In the late Third Era, wayshrines dedicated to the Divine can be found throughout the countryside.[36] At this time, the office of Archbishop of Mara is attested.[33] A wayshrine of Mara northwest of the city of Anvil was destroyed during the Oblivion Crisis in 3E 433.[36] In the same year, the Great Chapel of Mara at Bravil was desecrated by Aurorans, daedra in the service of Meridia, and several of its priests were killed.[37]

The worship of Mara in the province of Hammerfell is divided between the Crowns, who represent the conservatives, and Forebears, who represent the cosmopolitan Redguards.[38] Mara is known to both Crowns and Forebears as Morwha, a fertility goddess, however, the names Morwha and Mara are used interchangeably among the Forebears.[39] Morwha is considered the favorite wife of Akatosh or Ruptga, to the Forebears and Crowns, respectively.[39] The goddess is always depicted with four arms so that she may "grab more husbands".[38] Mara is worshipped throughout Hammerfell, including the Island of Stros M'Kai,[39] and is the patron deity of the regions of Antiphyllos, Ayasofya, Ephesus and Ykalon.[31] In the late Third Era, similarly to High Rock, the Benevolence of Mara was responsible for the administration of temples dedicated to Mara and the Maran Knights was also active in the province at this time.[31] A Conservatorium of Morwha was located in the city of Hegathe in the late First Era.[40]

Symbols of the Benevolences of Mara in the Iliac Bay region

Mara, a member of the pantheon of the Bretons,[8] is the patron deity of several regions of High Rock, such as Anticlere, Betony, Glenumbra Moors, and Northmoor.[41] In Anticlere, the 21st of Last Seed was known as Appreciation Day, an ancient holiday of thanksgiving for a bountiful harvest. It was considered a holy and contemplative day devoted to Mara, the goddess-protector of the region.[42]

In the late Third Era, temples dedicated to the Divine were administered by the Benevolence of Mara, a religious organization dedicated to Mara and her teachings, and could be found in major urban centers throughout the province. The Benevolence of Mara was led by a patriarch and was allied to the Temple of Stendarr, a religious organization dedicated to Stendarr and his teachings.[43] The Maran Knights were a controversial knightly order dedicated to Mara and the protection of her temples. Some within the priesthood of Mara called for the disbandment of the order, while others argued the order was necessary to create peace.[44]

The Divine is also worshipped as a member of the Nordic pantheon.[8] In the Second Era, Mara was associated with the Ice Wolves that inhabited the mouth of the White River in the northeast of the province.[30] Worship of Mara in the province of Skyrim was widespread in the Fourth Era and shrines dedicated to the Divine could be found both in the wilderness and in urban centers, such as at the Temple of the Divines in Solitude, and at the Temple of Mara in Riften.[23] A pond in the hold of Eastmarch was named after Mara.[23] Some argued the return of the dragons in 4E 201 was a sign from Mara signalling her displeasure with the people of Skyrim.[48]

Circa 2E 582, two Reachfolk clans, Eagleseers and Six-Fords were to hold a handfasting upon an altar of Mara at Hroldan Ring to unite the two clans, but it is unknown if they actually worshiped Mara herself.[49]. As of 4E 201 several Reachfolk accept marriage under Mara.[50]

Worship in the Summerset IslesEdit 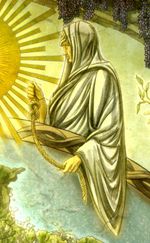 Mara is worshipped in the High Elven pantheon.[18] An Altmer legend tells that Nenamil, the Archon of Song, once embarked on a pilgrimage to see Mara's beauty in person, believing that the greatest love he could feel was love for the mother of creation. His journey eventually took him to what is now known as Archon's Grove, where he found a flower of surpassing beauty, the so-called Rose-of-Archon. Upon seeing the flower, he realized that Mara was more than just a being: she was beauty incarnate, found in every exquisite thing. From then on, Nenamil would preach Mara's beauty and the Rose-of-Archon would honor and represent her. Roses-of-Archon are collected by the Sapiarchs for the Divine Reverence to Mara, a ceremony that lasts for at least fifty-eight days.[51]

During the Three Banners War in the Second Era, a Temple of Mara located in the town of Bravil, Cyrodiil, was home to several holy relics of Mara, including a chalice, phylactery, dagger, and circlet. The Chalice of Mara was alleged to have been a wedding gift from Mara to St. Alessia, founder of the Alessian Empire, at her wedding to Morihaus.[52] In 2E 582, the Sphinxmoth Bandits, a group of bandits operating from the neighbouring Fort Sphinxmoth, looted the temple of its valuables, including the relics. The bandits were defeated by the Vestige and the relics were subsequently returned to the temple.[53] In 3E 427, on the Island of Vvardenfell, the Divine appeared before the Nerevarine as an apparition in the form of a Breton woman named Ama Nin and gifted the Nerevarine her blouse and skirt.[54] Some claim the Everflow Ewer was created by Mara.[55]