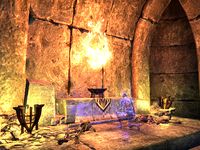 An aspect of Mehrunes Dagon communes with the Veiled Queen

Mehrunes Dagon is the Daedric Prince of Destruction, Revolution, and Ambition. He is the progenitor of Dremora and rules over the Oblivion realm of the Deadlands.

High Kinlady Estre is a vassal of his, and offers up her soul to him following the Veiled Heritance's repeated defeats, in exchange for Daedric reinforcements. Under his command, she has desecrated Torinaan, pillaged Dawnbreak, and led an invasion of Firsthold, where she is defeated in The Refuge of Dread of the Deadlands.

A cult of his worshipers led by Razor Master Erthas led an attack on the settlement of Whisper Grove, where it has now become the City of Ash. Following Erthras' death, he puts an end to the invasion in exchange for Gilraen, who becomes the wielder of the Mehrunes Razor. Her husband Fingaenion later hires the Undaunted to travel into the Knives of Discord region of the Deadlands in City of Ash II.

High Kinlady Estre will appear in a vision inside Torinaan, where you may witness the scene where she makes a pact with Mehrunes Dagon:

Estre: "Lord Dagon, my family has been ever faithful. Now, in my hour of need, I request your aid."
Mehrunes Dagon: "Your plot's exposed. Your supporters, crushed. And you come crawling to your lord. What do you have left to offer me?"
Estre: "Anything! Everything! I offer my very soul if it means I have power! The power to rule!"
Mehrunes Dagon: "So be it. I imbue you with a taste of my true power. Corrupt the shrines in Torinaan. Then, move on to Firsthold."

After you complete the quest, Mehrunes Dagon speaks to Gilraen:

Mehrunes Dagon: "I'm beside myself. You truly believe you've won. I didn't expect your little friends there could kill Erthas. But I stand corrected. All this trouble because of one Bosmeri woman. You are Gilraen, of the Whisper Grove, are you not?"
Gilraen: "I am.
Gilraen: Are you … Mehrunes Dagon?"
Mehrunes Dagon: "It was you who rallied this peasant village to contend with me. Fascinating that a mortal could be so troublesome.
Mehrunes Dagon: "I need a replacement for your Erthas. Come. Meet with me, and I will close this Oblivion gate, spare your people."
Gilraen: "I think … I think I have little choice. Tell the others to get as far away from here as they can."

She runs into the gate, and it closes behind her.

While on the trail for information on Emperor Leovic and his "Four Ambitions", you will be sent to an Imperial Cache Annex hidden in the Imperial City's sewers. Further in the annex, you will find ritual notes showing that Doombringer Eshil is there performing a ritual to commune with Mehrunes Dagon. As you approach the Shrine of Dagon, you can overhear a conversation between the Doombringer and the Daedric Prince.

Doombringer Eshil: "Mehrunes Dagon, show me where to find your Four Ambitions!"
Mehrunes Dagon: "Step through the portal and prove your worth to the lord of fire and flood!"
Doombringer Eshil: "To walk upon the sacred sands of the Deadlands? You honor me, Lord Dagon!"
Eveli Sharp-Arrow: "That cracked acorn is stepping into Oblivion?"
Eveli Sharp-Arrow: "Look, behind the statue! A portal! Come on!"

Following him through the portal, you will find yourself in part of the Deadlands. While making your way to the center of the area, you can overhear parts of the conversation between Dagon and Eshil.

Mehrunes Dagon: "I gave the mortals everything they requested, and yet we come to this."
Doombringer Eshil: "Your acolyte, the leader of our order. He sent me to find the Four Ambitions, Lord Dagon."

Continuing down the path, you hear more:

<A portal is formed in front of the statue.>
Mehrunes Dagon: "You bested my follower, mortals, so I shall permit you to leave my realm with your lives. Step through the portal and begone!"

Mehrunes Dagon makes a brief appearance in the background of a vision during this quest.