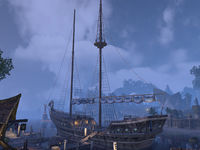 Pyandonea is an island continent[1] located to the far south of Tamriel which is home to the elusive Maormer, who had been exiled there by the ancient Aldmer during the days of Aldmeris.[2][3] The island is covered mostly in dense rain forests which provides a habitat for the southern water spirits[4]. It was also marshy, and full of insects.[3]

The Maormer practice a powerful form of snake magic which they use to tame the sea serpents of Pyandonea for use as mounts and warbeasts. King Orgnum, famous for his coffer, was from this land.[4] Pyandonea translates to "The Veil of Mist", and according to legend, Orgnum and his followers were banished to this place after he tried to lead a rebellion against the Aldmer, and an impenetrable mist would forever keep them from Aldmeris.[5] However, this mist would not keep them from targeting Summerset and southwestern Tamriel.[2] 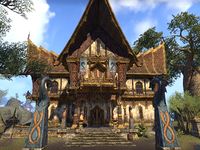 The Maormer embassy in Mistral

In the Middle Merethic Era, an Altmeri exploratory ship, the Pasquiniel, set sail south from the Summerset Isle in the direction of Pyandonea. It was never heard from again, and it's popularly assumed that they were lost at sea or died at the hands of the Pyandoneans.[6] At one point, Pyandonea may have become allied with the Aldmeri Dominion,[7] though they'd made countless attempts to invade the Summerset Isle throughout the course of history. For almost every year of the First and Second eras, Pyandonean forces led by King Orgnum harassed the coastlines of Summerset.[2][8] They were known to have pushed further north, as well, and harassed the coastline of Valenwood during the Interregnum.[9]

At some point during the Interrengum, a group of pirates journeyed to Pyandonea under the pretense of 'establishing trade routes', though truly intending to simply pillage the isle. Instead, however, they discovered a race of quadrupedal reptiles they referred to as Lizard Bulls inhabiting an isle off the coast. These trident wielding monstrosities initially were dead set on attacking them, though soon turned their sight on the Maormer after one of their ships arrived, leaving the crew enough time to escape. [10]

One of the only glimpses into the actual landscape of Pyandonea came in 2E 486, when a small Maormeri fleet was sighted off the coast of Alinor and King Hidellith ordered his navy to give chase. The navy followed the ships through uncharted waters and were ambushed at Pyandonea itself. Most of the fleet was destroyed, but several warships returned to Summerset. They described Pyandonea as a "sea jungle" barraged by mist storms. Massive plateaus spill over with vegetation which form mazes around valleys of ocean. Waving tendrils of kelp trap all but the Maormer's own ships, and provide a well-camouflaged home for the sea serpents that are Orgnum's guards and occasional mounts.[2] Pyandonea has "breeding pits".[UOL 1] Yew is one of the more common trees in the Pyandonea and is typically used in crafting bows.[11]

In 2E 582, the Green Lady Finoriell swam to Pyandonea, seeking vengeance for the murder of the Silvenar Edhelorn on Khenarthi's Roost. She killed the Maormer indiscriminately until she was spent. As she lay dying atop the highest sea-tower, the Sea Elves' greatest warrior came to claim her head as a trophy. Instead, she grabbed him and threw herself to the waves far below.[12]

The last contact with the island was in 3E 110 during the War of the Isle, when the Altmer, with the help of the Imperial Navy and the Psijic Order, eventually vanquished a Pyandonean armada.[2][8][13][14] Legend credits the Psijics with creating a freak storm that decimated the Pyandonean fleet.[15]

The historical fiction The Wolf Queen, v4 gives some details of unknown veracity on Pyandonea. The Pyandoneans have insect-like ships made with membranous sails and chitinous hulls, somewhat similar to some ships in Morrowind. The text also suggests that it was Queen Potema's machinations which led to the intervention of the Psijic Order during the War of the Isles.