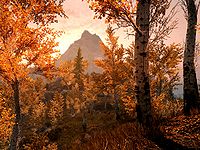 The Fall Forest of the Rift circa 4E 201

The Rift (sometimes called Rift Hold[1]), the southeastern hold of Skyrim, is a temperate region northwest of the intersection between the Velothi Mountains and the Jerall Mountains.[2] It is one of the four holds known collectively as the Old Holds.[3] The capital city of Riften is nestled in the expansive Fall Forest,[4] on the shores of Lake Honrich, which is drained by the Treva River and Lake Geir. The relatively mild climate allows for thriving agriculture.[2] The historic settlement of Greenwall was located to the north, and has often served as an important military fortification.[5][6][7]

This Lore-related article is a stub. You can help by expanding it.
Retrieved from "https://en.uesp.net/w/index.php?title=Lore:The_Rift&oldid=2665535"