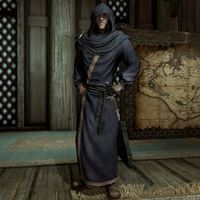 Farengar Secret-Fire, a Nord elemental mage, is the court wizard of Jarl Balgruuf the Greater. He advises the Jarl when Whiterun is facing a magic-based threat. He is also doing research into dragons and will ask you to retrieve a dragon tablet, found in Bleak Falls Barrow. As a court mage, he is one of the few people outside of the College of Winterhold who will sell you spells. Farengar can possibly be killed during The Whispering Door quest.

He may also give a tutorial for enchanting items at the arcane enchanter in Dragonsreach.

Farengar wears blue mage robes and a pair of boots. He is equipped with an iron dagger and carries a selection of common loot and gold. During the quest The Whispering Door, he also carries a copy of the key to said door. He knows the Destruction spell Firebolt.

Expecting that your business involves the current war, he will greet you with, "Come to Dragonsreach to discuss the ongoing hostilities, like the rest of the 'great warriors'?" He will then elaborate on the subject: "It seems this damnable conflict has claimed everyone's passions of late. Me, I prefer my books, and my spells." He will also discuss his passion for the magical arts: "There's a tranquility in magic, don't you think? It is simply energy, to be harnessed by those with the will and knowledge to do so."

If you go near him before you have completed the Bleak Falls Barrow quest he will somewhat rudely comment by either saying "I thought you were already on your way to Bleak Falls Barrow, the Jarl is not a patient man and neither am I." Or when exiting the conversation he will say: "Away with you!"

He can be questioned about a couple of topics:

Where can I learn more about magic?
"A prospective student, are you? Well, I'm afraid I'm not much good at teaching. You should try your luck at the college of Winterhold."

Have you encountered any dragons?
"Sadly, no. My work affords me few opportunities for such an adventure. Perhaps some here will bring one to Dragonsreach, like Olaf One-Eye once did. What a fascinating conversation that would be!"

Do you owe allegiance to the Imperials?
"If I said that was a tedious question, would you be smart enough to know what I meant? Probably not. As long as I'm left alone to pursue my research, I don't care who gives the orders. Now, I'm a busy man and your questions are boring me terribly. Good day."

What are the duties of a court wizard?
"I'll put it simply, so you'll understand. I advise the Jarl in matters of magic. If the hold is faced with any threats or mysteries of a magical nature, I am called upon to explain things and suggest a course of action. Hopefully that answer will satisfy you. Good day."

When exiting a conversation:

"You know, if you've got the aptitude, you should join the Mages College in Winterhold…" 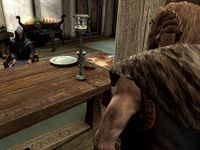 "This is a priority now."

After thanking you for coming to him with your concerns about Riverwood's safety, Jarl Balgruuf will introduce you to Farengar: "Come, let's go find Farengar, my court wizard. He's been looking into a matter related to these dragons and... rumors of dragons."

As you are walking over to see Farengar, he'll say, "I'll introduce you to Farengar. He can be a bit... difficult. Mages. You know." or "Farengar is probably puttering around in his lab. Day and night. I'm not sure he ever sleeps." When he gets to Farengar's lab, he'll say, "Farengar, I think I've found someone who can help you with your dragon project. Go ahead and fill him/her in with all the details." If you've previously spoken with Farengar, he'll say, "Farengar, I see you've already met my new friend here. I'm sure you two will get along famously."

Balgruuf: "This is a priority now. Anything we can use to fight this dragon, or dragons. We need it, quickly. Before it's too late."
Farengar: "Of course, Jarl Balgruuf. You seem to have found me an able assistant. I'm sure he/she will prove most useful."
Balgruuf: (to you)"Succeed at this, and you'll be rewarded. Whiterun will be in your debt."

Note: You can run ahead of Jarl Balgruuf, skipping the above dialogue, and tell Farengar directly "The Jarl said you had a project you needed help with." He will respond "Hmm? What? Project? You think you could help me? I really don't think so." However, depending on your magic skills, you may be able to persuade him that you could be useful:

Farengar will then take over the conversation: "So the Jarl thinks you can be of use to me? Oh yes, he must be referring to my research into the dragons. Yes, I could use someone to fetch something for me. Well, when I say fetch, I really mean delve into a dangerous ruin in search of an ancient stone tablet that may or may not actually be there." You now have three possibilities to respond:

Regardless of your choice, your next question will be to ask what he needs you to do. He will tell you, "I, ah, learned of a certain stone tablet said to be housed in Bleak Falls Barrow - a 'Dragonstone,' said to contain a map of dragon burial sites. Go to Bleak Falls Barrow, find this tablet - no doubt interred in the main chamber - and bring it to me. Simplicity itself." If you already have the Dragonstone in your possession, you can hand it over to him. Farengar will be pleased by your preparation "Ah! The Dragonstone of Bleak Falls Barrow! You already found it! You are cut from a different cloth than the usual brutes the Jarl foists on me." If you don't have it with you, Farengar will now offer you his normal dialogue options.

You will also be given the option to ask him further questions[verification needed — when does this dialogue appear?]:

Tell me more about the Dragon War.
"I'm not surprised you've never heard of it. Even I used to think it was just a myth. But not anymore. The Dragon War was a real event, although only the barest glimmer of the actual events has come down to us. Far back in the Mythic Era, the dragons were worshipped as gods in Skyrim. Many of the monumental ruins that still dot the landscape were, in fact, built as temples to the dragons. The details are lost, but at some point the Nords rebelled. After a long and terrible war, the Nords overthrew their dragon overlords.

So, were all the dragons killed in the Dragon War?
"Oh, no. Many were killed, of course. But many survived into historical times. Why, this very palace was built by one of Balgruuf's ancestors to hold a captive dragon. Hence its name - Dragonsreach."

When you return from Bleak Falls Barrow with the Dragonstone, you will observe a conversation regarding the book Holdings of Jarl Gjalund between Farengar and his "reliable source", who is Delphine, the innkeeper of Riverwood: 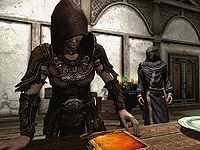 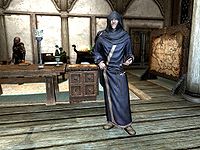 At this point, Farengar will approach you and take the Dragonstone from your inventory: "Ah! The Dragonstone of Bleak Falls Barrow! Seems you are a cut above the usual brutes the Jarl sends my way. My... associate here will be pleased to see your handiwork. She discovered its location, by means she has so far declined to share with me." He will then turn his attention back to Delphine:

After this acknowledgment, Delphine will return to studying the copy of Holdings of Jarl Gjalund on the table. If you try to speak to her, it quickly becomes clear that she has nothing more to say to you for now.

Irileth will shout for Farengar to come once the Dragonstone has been handed to him:

Irileth: "Farengar! Farengar, you need to come at once. A dragon's been sighted nearby. (to you) You should come, too."
Farengar: "A dragon! How exciting! Where was it seen? What was it doing?"
Irileth: "I'd take this a bit more seriously if I were you. If a dragon decides to attack Whiterun, I don't know if we can stop it. Let's go."

Once the conversation between Jarl Balgruuf and the Dragonborn is over:

Farengar: "I should come along. I would very much like to see this dragon."
Balgruuf: "No. I can't afford to risk both of you. I need you here working on ways to defend the city against these dragons."
Farengar: "As you command." 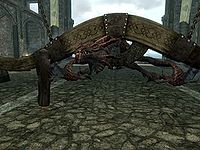 If you do not immediately release Odahviing after capturing him in Dragonsreach, Farengar will make an appearance to introduce himself to the dragon and attempt to perform "tests" on him but will flee when the trapped dragon demonstrates his fire breath out of frustration:

Farengar: "Incredible! Uh… sir, you have no idea how long I have waited for such an opportunity! I would be most appreciative if you would permit me to perform some, ah, tests on you. Purely in the interests of the advancement of knowledge."
Odahviing: "Begone, mage. Do not test my promise to the Dovahkiin."
Farengar: "I assure you, you will not even notice me. Most of them are hardly painful at all to a large dragon such as yourself."
Irileth: "Farengar, very bad idea. Even for you."
Farengar: "Surely you won't miss a few scales… or a small amount of blood…"
Odahviing: "Joor mey! What are you doing back there? Yol… Toor…Shul!"
Balgruuf: "Farengar! Enough, fool!"

Farengar can ask you to deliver frost salts for him:

Are you the only wizard in Whiterun?
"I believe I am, yes. Technically speaking, of course. The city is also home to a priest, priestess, an alchemist, and I'm sure others who practice. Ah, that reminds me. Speaking of alchemists, I have some frost salts for Arcadia. She asked me to obtain them for one of her potions. Would you be so kind as to deliver the frost salts for me? I'm sure Arcadia will provide some form of recompense…"

I'll deliver the frost salts for you.
"Good. You're clearly better suited than I am to carry out such a menial task."

Do I look like a courier to you?
"Well, let's see… travel-stained clothes, worn soles, blank and unintelligent expression… Yes, in fact you do."

"Ah, a student of the craft. You'll need to start by learning an enchantment. Take an enchanted weapon or piece of armor, then use the Arcane Enchanter to learn its secrets. The item is destroyed in the process, so be wary. Once you know an enchantment, you'll need a filled soul gem, and something to enchant. You'll use the Arcane Enchanter for that, too. Of course I have everything you need for sale, if you have the coin."

This is the merchandise found in Farengar's merchant chest. These items are only available if purchased from the merchant; they cannot be pickpocketed or stolen. They are restocked every two days.

This Skyrim-related article is a stub. You can help by expanding it.
Retrieved from "https://en.uesp.net/w/index.php?title=Skyrim:Farengar_Secret-Fire&oldid=2184115"