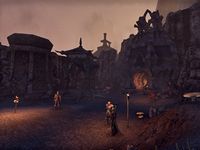 The summit of Trolhetta circa 2E 582 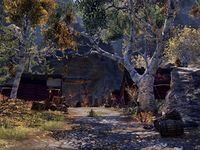 Trolhetta, also known as Mount Trolhetta, is a large mountain located in the Smokefrost Peaks region of southeast Skyrim, bordering Cyrodiil and Morrowind. Its located approximately at the intersection of the Jerall, Velothi and Valus mountain ranges.

The mountain has changed hands many times over the centuries. In the early First Era, it belonged to a Chimer clan, who built an extensive Daedric shrine on its peak. Beneath the shrine are a vast series of lava tunnels that twist and wind through the mountain's core.[1] In the mid-Second Era, Trolhetta was considered a part of the Rift, one of the Old Holds of Skyrim.[2]

In 2E 582, the summit of Trolhetta was the site of the battle between the forces of the Ebonheart Pact and the Worm Cult, led by the fused spirits of the legendary giant Sinmur and the necromancer Thallik Wormfather. The battle was won by the Pact forces using the power of Wuuthrad, which ended Sinmur's threat to the Rift and resulted in King Jorunn being honored by the spirits of Ysgramor and his Five Hundred Companions atop the mountain.[3]

Access to the mountain was limited to a cave in the southeastern corner of the Rift.[2] No trace of this cave remained by 4E 201.[4]