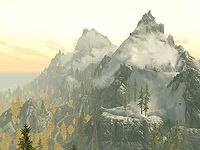 The Velothi Mountains seen from Skyrim circa 4E 201

The Velothi Mountains are the mountain range separating Morrowind from Skyrim. They are named after the Chimer prophet Veloth, who led the Chimer to leave their ancestral homes and resettle in Morrowind.

The mountains form the eastern border of the Skyrim holds of Eastmarch and The Rift. The southernmost part of the mountains borders the Morrowind region of Stonefalls to the southeast. At the southern tip of the mountain range, where it meets the Jerall and Valus Mountains, the volcanic peak of Trolhetta can be found.[1][2] The ash produced by this and other volcanoes falls upon the Stonefalls region, providing precious fertilizer in an otherwise arid landscape.[3]

The west and south-central region of Morrowind is mountainous and sparsely populated with few settlements. House Indoril occupies the heartland of Morrowind, comprising the lands south of the Inner Sea and the eastern coast.[4] House Redoran guards the western flank of Morrowind.[5] The Nords of Skyrim are still resentful of the land lost in 1E 416, and enviously covet the House Redoran-ruled coast and highlands of Morrowind's northwest borders, at times assaulting them.[6][7] The Nords have never been comfortable with the fact that the Dark Elves hold the west coast of the Inner Sea all the way up to Blacklight; and in some cases their maps elide that fact entirely.[UOL 1][8][9] Dunmer bandits and raiders live throughout the Velothi Mountains and the general border in caves. They target both villages and farms all over eastern Skyrim and carry memories from the Nord's occupation of Morrowind.[10] 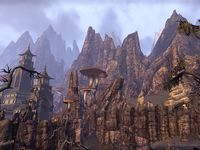 The Velothi Mountains seen from Morrowind circa 2E 582

In the Late Middle Merethic Era, the Velothi Mountains were settled by the Dwemer, who created cities beneath the mountain range, such as the great city of Mzulft. Presumably most of these cities followed the fate of their counterparts in Morrowind and Hammerfell and now lie deserted, but no further information on the cities exists.[11]

In 2E 864, a canopy tunnel provided easy travel to the mountains from Cyrodiil,[12] but no trace of the tunnel remained by 3E 433.[13] Some old Dwemer tunnels also existed beneath the mountains and were sometimes used by caravans and refugees from Morrowind circa 4E 201.[1][14][15] The Dunmeth Pass leads through the mountains and into northern Morrowind. High in the mountains lies the ancient temple of Skuldafn, along the Eastmarch border.