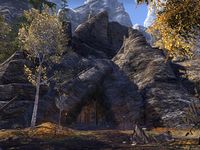 In the late-Merethic Era, the Pinepeak Cavern was chosen to inter one of the fallen Five Hundred Companions, Hakra, who had fallen in the battle against Sinmur, the Chieftain of the Giants.[2] Throughout the centuries, the Pinepeak Cavern had been used as a sanctuary for refugees in the area. While the local people would say that the cave is safe, many would refuse to enter, fearing that it would collapse on them.[3]

During the Interregnum in 2E 582, the Order of the Black Worm had launched an invasion onto the Rift, seeking to revive Sinmur and wreak havoc across the region. The Worm Cult had come across Pinepeak Cavern, to enslave Hakra's spirit, and later sacrifice her to strengthen Sinmur. However, Hakra was freed by an Agent of the Pact.[4]

As of 4E 201, Pinepeak Cavern had collapsed in and has since become a Bear's den.[5]