Canis Root is harvested from small, gnarled bushes. In the Rift, the bushes are found in birch woods near rock formations or at the base of cliffs. They are also found in swampy regions such as Hjaalmarch and along the northern coast of Haafingar.

In terms of combinations of two ingredients, Canis Root can be combined with 42 other ingredients.

51 guaranteed samples can be found in 32 different locations. Locations with the greatest numbers are:

With the Dragonborn add-on 22 more guaranteed samples can be found in 7 different locations. Locations with the greatest numbers are: 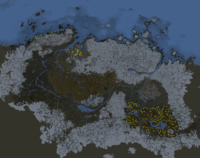 A map of all canis root plants in Skyrim's overworld.

There are 551 canis root plants found in 84 different locations. Locations with the greatest numbers are: