Ysgramor (sometimes Ysgramoor),[1] known as "the harbinger of us all",[2] was an ancient Atmoran king who came to Tamriel before recorded history as a refugee fleeing civil war in Atmora.[3][4] He is generally regarded as the first human ruler of Skyrim.

Some Elven scholars insist Ysgramor was responsible for unspecified "provocations and blasphemies" that led to the genocide known as the Night of Tears, when the human settlement Saarthal was attacked by the Snow Elves and all humans purportedly were slain except Ysgramor and his two sons, Yngol and Ylgar,[5] though some scholars believe this attack was unprovoked.[6] Ysgramor fled back to Atmora, gathered the legendary Five Hundred Companions, then sailed back to Hsaarik Head and drove the Elves from Skyrim and Solstheim, cementing himself as a "culture hero" of the Nords.[3][7][8] He wielded the axe Wuuthrad in battle[9] and rode upon a Storm Atronach Bear conjured for him by his personal Clever Man.[10]

Since he is the first known human to transcribe Nordic speech using Elven principles of writing,[11] Ysgramor is credited with being the first human historian.[3] Because of his exploits, he is known as "the first Harbinger, the first Man, [and] the bringer of Words", and the modern-day Companions still revere him as their only true leader.[12] His progeny ruled Skyrim until 1E 369, when the death of King Borgas brought an end to his direct line of known heirs.[6] However, his bloodline survived,[13] and he is still believed to be the wellspring from whom all Nordic kings are descended.[14]

Much of Ysgramor's life is clouded by myth and poorly kept records, such as his alleged affiliation with dragons and their cult.[nb 1] It is suspected that Ysgramor is credited with the deeds of several early Nordic kings.[6] Most myths associated with him have Herma-Mora, the "Demon of Knowledge", as the antagonist.[15] One such legend involves Ysgramor hunting the White Stag of Forelgrim, and a hare (Herma-Mora) in disguise tricked him into gaining long ears to better hear his game, before Shor intervened and warned him of the trickery of elves.[16] Apparently, some historians have misrepresented Ysgramor as being the leader of the first large group of human settlers from Atmora, when in fact he was merely following what was already a long-established tradition of migration.[6][17]

During his voyage to Tamriel with his Five Hundred Companions, Ysgramor lost his son Yngol to the "sea-ghosts" (likely an ancient, superstitious term for the dangers in the Sea of Ghosts),[18] and Ysgramor braved a storm to search for him in the treacherous waters.[5][19] When Yngol was found dead, Ysgramor wept with grief and killed a "dozen dozen beasts" in Yngol's honor.[5][19] Ysgramor ordered that a great city be built south of Yngol's burial place so that he could gaze at it from his palace. The great city came to be called Windhelm.[18]

According to the skalds of the Bards College, Ysgramor slew so many frost giants that he was covered in their blue blood. The rest of his foes fled the field and frost giants avoided the more populated areas of the province, thereafter becoming much rarer to find.[20] He and his Five Hundred Companions were the first to wear the blue war-paint based on these battles.[20][21] A large number of Giant clans inhabited the land, and were ruled by a powerful chieftain named Sinmur. According to legend, Ysgramor and the Five Hundred Companions fought a large-scale war with Sinmur and his kin, and both sides suffered severe casualties. The conflict culminated in a final battle between the two leaders in Sinmur's barrow. As they dueled, Ysgramor shattered Sinmur's club and finally slew him with his legendary battleaxe, Wuuthrad.[22][23]

Ysgramor's death was met with great sorrow and mourning among his kin, and the news quickly spread across Tamriel.[24] Although a grand tomb was built for him beneath Windhelm in preparation for his passing, Ysgramor instead chose to be buried with his most trusted generals in a barrow on the northern shores of Skyrim, facing towards Atmora.[18][25] His son, Ylgar, subsequently took up the mantle of leadership.[26] In death, Ysgramor journeyed to the Hall of Valor in Sovngarde, where he continued to watch over the Nord people and the Companions. 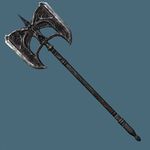 Wuuthrad, meaning "Storm's Tears" in the language of Atmora, was the legendary battleaxe wielded by Ysgramor during his conquest of Skyrim in the late Merethic Era. With Wuuthrad in his hands, Ysgramor and his Five Hundred Companions slaughtered an untold number of elves, which culminated in the founding of the First Empire of the Nords. For the Companions, Wuuthrad is a sacred relic which holds a great deal of respect and reverence, and through it they can trace their line straight back to the first Harbinger. It is held to be the greatest of all Nord weapons. 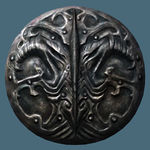 The Shield of Ysgramor was buried within the tomb of that famous hero of the Nords in the Late Merethic Era. It's unknown if Ysgramor ever wielded this shield in battle.The wielder of the shield is both harder to kill and resistant to magic.

Long-Launcher was the legendary longbow artifact of Ysgramor. He used it during many hunts and battles throughout the course of his life in both the Atmoran Frostwood and in Skyrim. During his time in Atmora, the bow once needed to be re-strung, so Ysgramor collected the laments of the Giant-Wives and brought them to individuals known as Froa and Grosta who twisted them into the Woeful Bowstring. When the bow made use of this new bowstring, it took on a form of sentience, sighing when Ysgramor held it and moaning whenever it was shot.