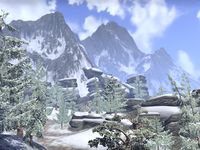 The Jerall Mountains seen from Cyrodiil circa 2E 582 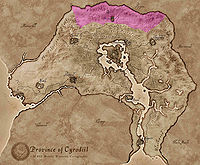 Map of the Jerall Mountains in Cyrodiil

The Jerall Mountains are a mountain range on the border between Cyrodiil and Skyrim. They meet the Velothi and Valus Mountains at the Morrowind border, and the Dragontail Mountains at the Hammerfell border. The Jeralls are rugged, steep, and inhospitable, with only a few traversable passes. Of particular note is the Pale Pass, which was the site of the abrupt end to the First Akaviri Invasion in 1E 2703, after which its location was lost, only being rediscovered in 3E 433.[1]

The largest town in the Cyrodilic part of the Jerall Mountains is Bruma, which is connected to the rest of Cyrodiil via the Silver Road and Orange Road. The forests of the High Jeralls provide wood for the region.[2] Dive Rock and Gnoll Mountain are among the few named peaks in the region. Other settlements include Applewatch, Cloud Ruler Temple, Frostcrag Spire, Lord Rugdumph's Estate, and the Temple of the Ancestor Moth. Shrines to Azura, Hermaeus Mora and Namira are located high up in the mountains, away from scrutinizing eyes.[3] 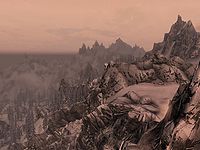 The Jerall Mountains seen from Skyrim circa 4E 201

The mountains border the Skyrim hold of Falkreath to the north and the Rift to the northeast. Its harsh, cold climate has made the mountains nearly inhospitable, with few if any inhabitants living there and no major settlements throughout history. Some points of interest include Fort Neugrad, the dragon shrines of Ancient's Ascent and Lost Tongue Overlook, the Dwemer ruins of Rkund, or the large Nordic ruin of Arcwind Point. In the easternmost part, where the mountain range meets Velothi and Valus Mountains, the volcanic peak of Trolhetta can be found.[4][5]

Here in the mountains, the First Empire of the Nords built strongholds to defend their southern frontier. One of these bastions was Old Fort, an example of the Nords' affinity for wood and timber construction.[6] It was still standing by the mid-Second Era.[7]

This Lore-related article is a stub. You can help by expanding it.
Retrieved from "https://en.uesp.net/w/index.php?title=Lore:Jerall_Mountains&oldid=2664492"