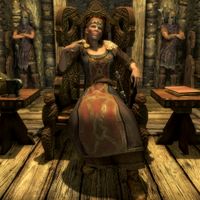 Laila Law-Giver on her throne

Laila Law-Giver is the Jarl of Riften, though the amount of influence she actually has over the citizens of the Rift is debatable.

She wears a set of noble clothes and fur-lined boots, along with a silver and sapphire circlet. In combat she wields a leveled enchanted sword. She also carries a selection of upper-class items and gold.

When you first enter Riften, it becomes obvious that the Thieves Guild maintains a high level of influence over the happenings of the city, yet Laila seems convinced that she has things under her control. Through her ambient dialogue, it is made apparent that she doesn't find the Thieves Guild a problem. The court officials also assuage her concerns, telling her that nothing is wrong, particularly her steward, Anuriel, who is actually a Thieves Guild infiltrator put in place by Maven Black-Briar to manipulate Laila into defending Maven's interests and keep her from interfering with the Guild.

She has two sons, Harrald and Saerlund. She believes Saerlund has gone crazy due to his dislike of Ulfric Stormcloak, and has tasked her court wizard Wylandriah with determining the cause of her son's sickness. This may be a front however, as if you become a Thane of the Rift, she will confide to you that while she supports the Stormcloaks, she has little faith in Ulfric himself. Her housecarl, Unmid Snow-Shod, however, is a staunch supporter of Ulfric and his rebellion.

If you are aligned with the Imperial Legion during the civil war and have captured the Rift, either by conquest or by negotiation during Season Unending, she will be removed as Jarl and be replaced by Maven Black-Briar. After this, she can be found in the Palace of the Kings in Windhelm, lamenting her situation while placing the blame for the loss of her hold on herself: "I feel so helpless out here. The people of Riften depended on me, and I failed them.", "Unmid and Anuriel shouldn't blame themselves for Riften's fall, I am the one who's ultimately responsible." She will also vow to do better as Jarl, should she get the chance: "If Riften can be retaken, I will redouble my efforts to ensure the safety of my subjects and the defense of the Rift."

Laila can regularly be seen discussing court matters with her steward Anuriel:

She may also converse with Harrald, either to confirm rumors about the Ratway or to talk about Saerlund's beliefs:

She can be seen inquiring her court wizard, Wylandriah, about Saerlund:

Wylandriah: "Do you realize how delicate the experiment is you've interrupted by sending for me? I may need to throw out the components and start again."
Laila: "How dare you take that kind of tone. You're in service to me, remember?"
Wylandriah: "I'm sorry my lady. The stresses of all this research... it's becoming more than I can bear."
Laila: "You're forgiven. Now, I want to know if you've made any progress with my son. Is he cursed? Has he been possessed?"
Wylandriah: "Sorry, my lady. I've been looking but I'm convinced Saerlund says truly believes what he is saying."
Laila: "Very well. Keep at it. You may go."

Laila may request escort from her housecarl, Unmid Snow-Shod to travel around Riften, though he will object:

Laila: "Unmid, I wish to travel about the city. Prepare an escort please."
Unmid: "Begging your pardon my lady, but I strongly recommend against it."
Laila: "Anuriel seems to think that seeing me on the streets might bolster the city's morale."
Unmid: "My lady, there could be agents of the Empire looking for an opportunity like that to have you killed. Are you willing to take that risk?"
Laila: "No. Of course you're right, Unmid. I'll stay here for now."

Laila: "Maven! Always a pleasure to receive you. What can I help you with today?"
Maven: "Thank you, Laila. I wanted to discuss the protection of my shipments." OR "I'm certain you're aware of the loss I sustained a fortnight ago."
Laila: "Yes, indeed. An entire caravan shipment of your mead taken by Imperial soldiers. What of it?"
Maven: "Well, I'm also certain you're aware that our own city guard failed to provide the protection required to ensure safe passage of the shipment."
Laila: "Indeed. We lost three soldiers in that attack. A sad day for Riften."
Maven: "I have payments to make you realize. If I can't make them, I can't make Black-Briar Mead." OR "Quite. To be brief, I need compensation for the lost shipment. Since Riften was responsible for it, Riften should pay for it."
Laila: "We... don't have enough to..."
Maven: "Laila, Riften is my home, but if my meadery can't be safe here, I'll just move it elsewhere."
Laila: "No, that won't be necessary. You'll have compensation for your loss."
Maven: "Thank you, Laila."

Unmid: "Where's Anuriel?"
Laila: "She's watching over the others. Look alive now."
Unmid: (shouting out to trespassers)"Stop right there! Where I can see you."
Laila: "Riften denies the Emperor. You are here illegally. Stand down and you will be arrested and tried in the morning. Resist and you will die."
Unmid: "As you wish. Protect the Jarl!"

The battle would have concluded with this exchange between Laila, Maven, and Legate Rikke, although Rikke's dialogue is incorrectly attributed to Galmar Stone-Fist:

Maven: "I think I'll like living here."
Laila: "So enters Maven Black-Briar, the glint of Imperial coin in her eyes. So tell me, what's the price for a woman's integrity these days?"
Maven: "You never were able to see the forest for the trees, were you?"
Laila: "We Nords were proud warriors once. And we still could be. Evidenced by the men and women who fought and died bravely today. You could see that if you had any faith left in that black heart of yours. But no, you're content to snatch scraps falling off the Emperor's table. Fine. Take my home. Take my city. May it burn down around you."
Maven: "A bit melodramatic, even for you Laila. Pack your things and go."
Laila: "One day when you can see past your own interests, you will come to see that we were right. And this... This is all wrong."
Rikke: "If you ladies are finished bickering, there's much to be done. Jarl Black-Briar put your government together. Do it now, or there will be rioting in the streets. We must move quickly to prevent further violence."
Maven: "Jarl Black-Briar. I must admit, I do like the sound of that. And don't worry about any rioting, Legate. I have it under control. We will soon begin publicly executing captured men. That should send a clear message to the people."
Laila: "Yes, but not likely the one you intend."
Maven: "Oh? I don't expect anyone to miss my meaning. Come, Legate. There's much to do."

Laila: "Ahhh... It's good to be home."
Maven: "Welcome back. I've left a few surprises for you to discover."
Laila: "How kind of you. And I've brought an army to give you a going away parade."
Galmar: "If you two are finished with the touching homecoming, there's a city in chaos out there."
Laila: "Indeed. Come, there is much to be done."