The sigil of the Pact

"The rash actions of those who sit the Ruby Throne, or who pull their strings, have brought Tamriel to the verge of irretrievable doom. They must be scoured from the face of Cyrodiil, and the decaying remains of the Empire of Men must be swept away. It shall be replaced by the Pact, which will enforce peace across the continent and strictly regulate all involvement in dangerous magical pursuits." — Alla Lalleth[1]

The Ebonheart Pact was a military alliance between the Great Houses Dres, Hlaalu, Indoril, and Redoran of Morrowind, the Kingdom of Eastern Skyrim, and the tribes of Shadowfen and Thornmarsh in Black Marsh[2] during the chaotic Interregnum of the Second Era. It vied with the Aldmeri Dominion and Daggerfall Covenant for control over the contested Ruby Throne in Cyrodiil. It was a creation of unlikely allies, who had long histories of strife between them, but united for mutual defense, first against Akaviri invaders and later against the Daedric cultists of Molag Bal in Cyrodiil. They aimed to wipe away the rash rule of the Empire and end once and for all mortals' entanglements with higher power from beyond Nirn.[1] The Pact was led by Jorunn the Skald-King, who headed the Great Moot, as well as the three living gods of the Dunmer.

The full extent of the Pact's territory in Black Marsh is disputed. Vicecanon Heita-Meen, who was called by the Hist to lead the Argonians to join the Pact, claimed that the tribes of Murkmire joined together with Shadowfen and Thornmarsh.[2] However, Murkmire is a region on the southern coast of Black Marsh and centered on Lilmoth; although the Pact sent envoys to Murkmire to convince the tribes to join, the region was far removed from Pact lands and remained fully autonomous. Locals discounted Heita-Meen's claims as being purely aspirational.[3] Some sources incorrectly[4] name the region surrounding the city of Gideon as Murkmire.[5][6] Given that this region borders Shadowfen and Thornmarsh, it is possible that Heita-Meen's claims refer to Gideon's hinterlands.[nb 1]

The Pact arose out of the Second Akaviri Invasion in 2E 572. The force under the command of Ada'Soom Dir-Kamal landed just north of Windhelm, taking the city completely by surprise.[7] The city was sacked and Queen Mabjaarn and her heir Nurnhilde were slain, leaving the crown to Mabjaarn's son, Jorunn.[8] Together with his twin-brother Fildgor, he rallied a desperate defense, but the Akaviri army bypassed him, marching instead into eastern Morrowind, where they were met by Dunmeri forces under Almalexia. In an unprecedented show of cooperation between races with a great deal of historical enmity, Jorunn and Almalexia worked together to encircle Dir-Kamal's forces in Stonefalls.[9] The resulting Battle of Vivec's Antlers was a close-fought engagement until the surprise arrival of Argonian reinforcements, who helped drive the invaders back into the sea, ending their threat to Tamriel.[7]

This allegiance forged in battle was ratified with treaties signed in Ebonheart,[9] resulting in the manumission of Argonians enslaved by the Dunmer as thanks for their crucial intervention.[10] The Pact struggled to reconcile the desires of three such distinct factions, but was able to stay strong for over a decade due to the need for mutual defense and the camaraderie of brothers-in-arms.[9] Eventually, the Tribunal became aware of dark happenings in Cyrodiil, and called upon its allies to mount a righteous war against the corrupt and disintegrating Empire.[11]

During its existence, it successfully overcame an invasion by the Daggerfall Covenant, through summoning the former Chimer warriors, the Brothers of Strife. It faced trouble in the form of Maulborn and Stormfist uprisings in Deshaan and Eastmarch, respectively. Shadowfen was attacked by the Aldmeri Dominion, and the Rift was attacked by Reachmen and the Worm Cult. However, the Pact managed to deal with all these threats.[12] 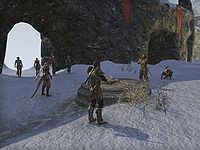 The Ebonheart Pact was governed by a separate body called the Great Moot, wherein decisions were ratified by representatives from the Pact's three member nations. The Great Moot convened in the Pact's capital of Mournhold.[13] In 2E 572, Jorunn the Skald-King of Eastern Skyrim was named acting High King of the Great Moot after he thwarted an Akaviri invasion with the aid of Dunmer and Argonian forces.[8] In 2E 582, Jorunn's rule was again ratified at the summit of Skuldafn following his brother Fildgor Orcthane's failed attempt to usurp the throne.[14]

On the regional level, vicecanons represented each of the three Pact provinces of Skyrim, Morrowind and Black Marsh to oversee the safety and prosperity of that region. For example, in 2E 582 the Black Marsh region of Shadowfen was overseen by vicanons Hrondar (Skyrim), Servyna (Morrowind) and Heita-Meen (Black Marsh) from its capital Stormhold. Vicecanons were selected based on their strategic and diplomatic skills.[15]