Sinmur, also known as Sinmur the Terrible and Giant of Legend, was a Merethic Era Giant chieftain from Skyrim. Leading hundreds of his kin, he is perhaps best remembered in his epic conflict against Ysgramor and the Five Hundred Companions.[1][2]

When Ysgramor returned to Skyrim in the Merethic Era, the Snow Elves were not the only obstacles that stood in his path for expansion. A large number of Giant clans inhabited the land, and were ruled by a powerful chieftain named Sinmur. According to legend, Ysgramor and the Five Hundred Companions fought a large-scale war with Sinmur and his kin, and both sides suffered severe casualties. The conflict culminated in a final battle between the two leaders in Sinmur's barrow. As they dueled, Ysgramor shattered Sinmur's club and finally slayed him with his legendary battleaxe, Wuuthrad.[1][3]

The war with the Giants was over and the companions rejoiced. A ballad named "The Song of Sinmur" was even written documenting the conflict.[4] As a precautionary measure. great steps were taken to ensure Sinmur would never return. His bones were interred deep within the vaults of Fallowstone Hall, the ancient headquarters of the Companions. Sinmur's tomb was then locked with a magical seal. The spirits of two Companions who fell in the war, Jalarma Fireheart and Bron Darkhammer, were bound to the tomb to keep the unwary away from his remains.[2] The spirits of the Companions Hakra and Valdur, who also fell in the war, were bound to the Rift as caretakers to guard against threats.[5] 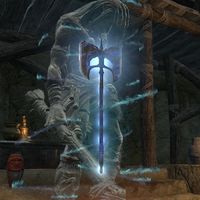 Wuuthrad being used to raise Sinmur

During the Alliance War, the Order of the Black Worm, led by the necromancer Thallik Wormfather, sought to reanimate Sinmur and an army of his kin.[6][7] With the aid of a Reachmen tribe, they attacked Fallowstone Hall, infiltrated Sinmur's tomb and awakened his spirit.[2] They also stole Ysgramor's axe, Wuuthrad, as it had become imbued with great power after slaying Sinmur. The Worm Cult believed this power could be used to raise Sinmur and use him in their schemes.[8]

In order to empower Sinmur further, the Worm Cult scoured the Rift to locate spirits of deceased Companions. Their plan was to enslave these fallen warriors and bind them to Sinmur's spirit. The spirit's of Harka and Valdur were found, but the Vestige intervened and stopped the Worm Cult.[9][10]

Eventually the spirit of Sinmur made its way to Arcwind Point, where Thallik Wormfather began conducting a ritual to raise the spirit of Sinmur, using the power of Wuuthrad. Thallik's plan was foiled when the Vestige interrupted the ritual and killed Thallik, with the aid of the ancient Companions Hakra and Valdur. Unexpectedly, Wuuthrad was shattered in the process and three fragments of the axe were scattered across the Smokefrost Peaks. It later came to light that Thallik didn't die, but instead used the remaining power within Wuthraad to fuse his spirit with Sinmur.[11][12]

With Sinmur reanimated, the giant left Arcwind Point and rampaged east towards Riften. Causing vast damage to the north of the city and the surrounding farmsteads, he continued onwards to the summit of Mount Trolhetta.[13] All the shards were eventually recovered by the Vestige for the Ebonheart Pact to be used against Sinmur and the Worm Cult.[6] Because Wuuthrad was originally used to slay Sinmur, even the shards would do him harm. A method of harnessing this power was discovered by the Pact, involving placing the shards in runic braziers.[8] The Vestige, Jorunn Skald-King and a legion of Ebonheart Pact soldiers traveled to the summit of Trolhetta to face Sinmur. Using the shards, the spirit of Sinmur and Thallik was torn asunder and Sinmur was severely weakened. This allowed the Pact to deal the killing blow and finally banish Sinmur.[14]