Tamriel is the vast continent where the events of the Elder Scrolls occur. For much of its history, it has consisted of nine provinces: Black Marsh, Cyrodiil, Elsweyr, Hammerfell, High Rock, Morrowind, Skyrim, Summerset Isles, and Valenwood.

Tamriel is located on a planet called Nirn in the realm of Mundus, together with the continents of Akavir, Atmora, and Yokuda. Aldmeris and Lyg are other landmasses that do not have solid evidence for their physical existence. The Eltheric Ocean lies west of Tamriel and the Padomaic Ocean surrounds the remainder. Islands of note that are not usually considered part of any continent include Pyandonea, Cathnoquey, Esroniet, Roscrea, Thras, and Yneslea.

Beyond Mundus, the Aurbis contains numerous Planes of Existence including the 'outer realms' of Aetherius and Oblivion, and the infinite Void. 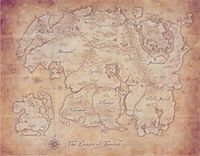