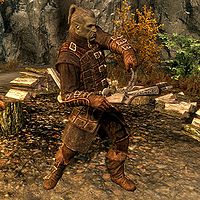 Durak is an Orc ranger and a vampire hunter. He is the first to approach you about the recent vampire menace and recruits you into the Dawnguard. If you speak with him in Dayspring Canyon, he will give you a crossbow and 45 steel bolts. He will tell you that the crossbow is a "Dawnguard specialty" and is the best weapon to use when trying to take down vampires.

Durak will be available as a follower once the quest Prophet is completed. He is one of the few followers who has no maximum level. He will continue to level up with you.

He wears a set of Dawnguard armor, including matching pairs of gauntlets and boots. He is equipped with a Dawnguard war axe and a Dawnguard shield. He will switch to a crossbow supplemented with 14 steel bolts for long range attacks should the need arise.

He will approach you in one of the major cities:

"You there. The Dawnguard is looking for anyone willing to fight against the growing vampire menace. What do you say?"

What's the Dawnguard?
"We're vampire hunters. We search out and destroy those bloodsucking scum wherever we find them."

Sorry, I'm not interested.
"That's what everybody says, right up until they find their throat being ripped out by a pack of hungry vampires."

I haven't noticed any vampire menace.
"You're not paying attention then. Like most everyone else around here. Haven't you heard that the Hall of the Vigilants was destroyed by vampires? They never took the threat seriously, and now they've paid the price."

Vigilants? Dawnguard? What are you talking about?
"The Vigilants mostly hunt down daedra worshippers, which is why they got torn to pieces when they went up against vampires. That's why our leader Isran is reestablishing the Dawnguard. Real, serious vampire hunters."

Killing vampires? Where do I sign up?
"Ha. Isran's going to like you. Go talk to him at Fort Dawnguard, southeast of Riften. He'll decide if you're Dawnguard material."

If spoken to again if you've said you weren't interested he can say:

If spoke to again if you offered to join up:

"Report to Isran at Fort Dawnguard. And get moving if you're serious about it. The vampires aren't going to wait around to make their next move."

When spoken to at Fort Dawnguard:

What's that you're shooting with?
"Never seen a crossbow before, eh? Not surprised. Kind of a Dawnguard specialty. Nothing better for putting down vampires. Here, take this one and give it a try. You'll want to get to know how to use it if you really plan to join the Dawnguard."

During Isran's speech he will say:

"The prophecy is no more!"

During this quest he can shout:

"It is time for action."
"Destroy every last one of them!"

You can ask him why he joined:

Why did you join the Dawnguard?
"I lost two wives to vampires. I will avenge them. It is good to know that I will not have to do it alone. I am glad this Dawnguard exists."

When exiting conversation with him:

"May your blades stay sharp."