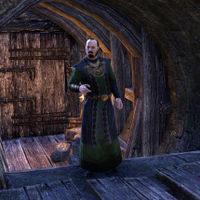 Goharth Ironbelly is a Nord merchant found in Riften. While helping Lyris Titanborn investigate the Icereach Coven, his name will appear as a possible lead.

While investigating the Icereach Coven, Lyris will find a note on one of the vampires who ambushed her which mentions Goharth as a supplier to the coven. He can apparently be found at the Withered Tree in Riften and is the best lead you have so far. Travel to the inn with Lyris and she ask you to remain inconspicuous when he arrives.

After she walks to the bar, Goharth will arrive and the following scene will play out: 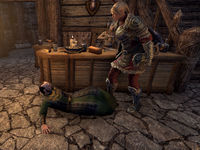 You can then follow the merchant through the city to the Ratway entrance. If you get too close to him Gorharth will stop and admonish you:

Once inside, continue to follow his trail through the tunnels and you'll eventually find him. He will be standing on a grate on the floor above and you will have reached him in time to eavesdrop on his meeting:

His response depends on how often you were seen by him. If he didn't spot you at all:

If he spotted you a few times:

If he spotted you many times and confronted you: 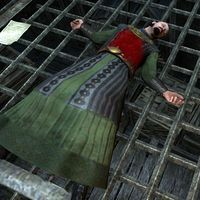 After retrieving the key that fell through the grate, you can reach his body upstairs and Sister Balra will be long gone. After reading the pamphlet, you will have found an important clue for your investigation.